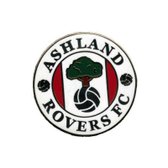 Another Tuesday, another away day for the Reserves.

At least it's not a massive trek like last week's journey to Mickleover, it's just a short trip this time around - all the way over in deepest, darkest Kirkby in Ashfield on Kingsway Park.
A 7.45pm kick off on a mild night, but there is a fair old breeze blowing across the pitch, it may turn a lot colder as the evening wears on.

Teversal are in their dark-blue away kit again with the keeper in bright orange, and the Tevie Boys line up as follows...

The teams are out and in position. Ashland in their main kit of red and black striped shirts, black shorts and red socks.
7.47 : The referee blows his whistle and the Rovers get the game underway.
7.56 : A corner is cleared and Luke Beastall strikes the loose ball from around twenty yards out and the ball drop just under the crossbar. 1-0 Tevie.
7.58 : A shot from a similar distance beats the keeper just inside the post to level it up. 1-1.
8.01 : A diving header from an Ashland cross glances the foot of the post and goes wide.
Both sides are having chances, the best for Teversal coming from Ryan Hancock whose shot flew just over the crossbar.
8.26 : Ben Agbakosi sticks the ball past the Ashland keeper to give the Tevie Boys the lead. He's been threatening it all night and it finally pays off. Let's hope we can hang onto this lead until half time (and beyond). 2-1 Tevie.
8.31 : Now, what was I saying!? Ashland get another leveller just before the break, another one just inside the post. 2-2.
8.32 : The referee blows the whistle to signal for the break.
Half time at Kingsway Park : Ashland Rovers 2-2 Teversal FC Res.
8.45 : Teversal get the second half underway. No changes for Teversal at the break.
8.48 : Ashland Rovers take the lead for the first time in the game. A corner isn't cleared and a scramble ends with the ball dropping over the line. 3-2 Rovers.
8.58 : Luke Beastall goes close with an effort going just high and wide of the angle of bar and post.
9.04 : Yellow card for Jack McWilliams, for a foul on the edge of the penalty area. The free kick is a poor effort that goes wide.
9.05 : Tevie Sub : 15 on for 11. Jack Kirk replaces goalscorer Ben Agbakosi.
9.07 : Sub Jack Kirk finds the ball at his feet in front of the goal and slams it past the keeper to level the scores again. 3-3.
9.17 : Brandon Hunt sends the ball over the bar from close range. Should've scored there!
9.19 : Yellow card for Jake Allen.
9.25 : Tevie Sub : 12 on for 5. Kyle Coleman replaces Jake Allen (ankle injury).
9.30 : Tevie Sub : 16 on for 9. Jack Bradley replaces Brandon Hunt.
9.31 : A loose ball is struck in the area and the only thing that stops Teversal going behind is a glancing header over the bar by Jack McWilliams.
Full time at Kingsway Park - Ashland Rovers 3-3 Teversal FC Res.
A draw was a fair result at the end of the day, The Tevie Boys have got to concentrate after they've scored - twice within five minutes of scoring tonight, Ashland had drawn level undoing the good work that they had done.
On Saturday, the Reserves are on the road again when they travel over to Blidworth Welfare for another league fixture.