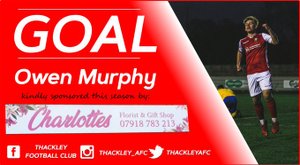 Thackley should have been playing at home on Tuesday night but their fixture against Knaresborough Town was switched because the Dennyfield surface was still suffering from the recent high level of rainfall. The home side were three places lower in the table than Thackley but, after a rather slow start to the season, results had begun to pick up. Both teams had lost out to the weather on Saturday but it was over two weeks since Thackley had played. Ryan Basi returned to the defence after injury and Ben Grech-Brooksbank and Simon Poole were back in mid field.

The Manse Lane pitch looked in good condition considering the amount of rain that had fallen recently. From the start in looked like both teams were lacking game time. The first chance came eleven minutes in, Owen Murphy got clear but home keeper Sam Lee came out to block his shot. Neither side were playing to their potential, both giving the ball away too easily. Thackley’s Albert Ibrahimi picked up a yellow card for a foul on Ben Parkes, a few minutes later the Knaresborough player’s name was added to the referee’s book for a retribution tackle. Paul Whiteley picked up a booking moments later for a rather innocuous challenge, the game was becoming a bit fractious. Toward the end of the half Knaresborough started to press, the major danger coming from set pieces, particularly corners. Thackley were slow to clear these and the ball bobbed about in the box, it just needed a finishing touch. With five minutes of the half remaining Thackley should have gone in front, Jack Normanton raced clear but again Lee came out to block his shot. The home side scored just before the break; it followed a corner on the left given after Luke Wilson had got down well to turn a long range shot around the post. Ex Thackley player Sam Cook headed in past a rather static defence.

Seven minutes into the second half the home side went two ahead, again the goal came from a poorly defended set piece. Tom Dugdale’s free kick beating Wilson via the head of Rob Youhill. A couple of minutes later Thackley had got a goal back, Murphy breaking down the left and firing in a shot that Lee could only help into the net. Dan Broadbent replaced Seb Scaroni as Thackley looked for the equalising goal. The game was very scrappy, with not much football being played, balls hoisted forward for forwards to chase, the home defence winning most of the aerial battles and able to clear their lines. Asa Mitchell was introduced in place of Simon Poole to add to the forward push but few chances were created. Thackley huffed and puffed but little action progressed into the danger area. Ray Sibanda came on for goal scorer Murphy but things continued in much the same way. Knaresborough were reduced to ten late on when Sam Cook was sin binned for his comments to referee Jamie Rhodes but the home side held out to take all three points.

Two good chances in the first half before Knaresborough scored their opening goal, if converted it could have produced a much different result to this game. As it was, the game contained plenty of energy but lacked any sort of quality.

Another away day for Thackley on Saturday when they make the trip to promotion contenders Penistone Church.