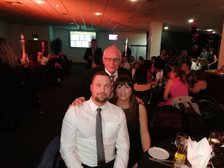 We are sad to announce that our long serving Secretary, Mick Lodge, is standing down from his role with Thackley AFC. Mick was appointed Secretary in August 2010 and has held the role with professionalism and distinction since this date. Mick was a 2019 finalist in the Bradford Sports Awards in the Volunteer category as recognition for his contribution to Thackley AFC and the community. The club is indebted to Mick’s service and hard work during his time with Thackley AFC. Mick is a firm favourite with all Thackley AFC players, committee members, volunteers, supporters and opposition teams and officials.

The Club would like to formally place on record its gratitude to Mick for his service. Mick first notified the Club of his intentions to step down 12 months ago, as a result of relocation plans with his family. Despite moving out of the local area at the start of the 2019/2020 season, Mick was determined to stay on in his role to allow the Club to identify and appoint a replacement, as well as ensure the smooth passing of duties.

We are also pleased to announce that Mick will be replaced as Secretary by Richard Holmes. Richard is no stranger to the NCEL, having served as Chairman of local rivals Campion for over 15 years. Richard stepped down from his role at Campion in the summer of 2019 and he was at the helm during their rise up the leagues from the West Riding County Amateur League to the NCEL Division One.

Since the summer of 2019, Richard took a well-earned break from non-league football and in January 2020 agreed in principle to take over as Secretary from Mick at Thackley AFC. Since this date, Richard and Mick have worked closely together to ensure a smooth handing over of duties and, since March 2020 Richard has formally been appointed to and accepted a position on the Thackley AFC Committee.

Given the NCEL Season has now concluded, Mick, Richard and the Club agree that now is the right time for Mick to formally stand down and Richard be appointed as Secretary.

“It is a sad day that we announce Mick is formally leaving the Club. When Mick first notified the committee of his intentions to stand down, we knew immediately what a massive hole this would leave for us to fill. Mick is not just an exceptional Secretary, but he is an exceptional person. Mick always approaches adversity with a smile on his face and has given so much to Thackley AFC over his time with us. I hope that Mick will stay involved with the Club in some capacity, and I am grateful for Mick continuing in his role for the 2019/2020 season to allow us to identify and appoint a new Secretary to continue Mick’s good work. Personally, I also wanted to say thank you to Mick for helping me firstly become involved with the Club, and secondly the much-needed assistance during my first two seasons as Chairman.

It is however a real coup to be able to welcome Richard formally to the Club and to his role as Secretary. We were aware that Richard had stood down as Chairman of Campion in the summer of 2019 and we were delighted that Richard agreed to join us at the turn of the year. Richard has already shown the experience and knowledge which he brings to the role, assisting since the Covid-19 Lockdown was implemented with grant applications which the Club are putting forward and bringing fresh new ideas to how we run the Club as a whole. I and the rest of the committee look forward to working with Richard moving forwards.”