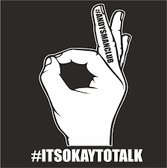 Thackley AFC is partnering with Andys Man Club for the 2019/2020 season, after being adopted as the club's first ever charity of the season.

Andys Man Club was started in August 2016. The aim of the charity is to cut in half suicide in men under the age of 45. The club is a talking group, a place for men to come together in a safe environment to talk about issues and problems they have faced or are currently facing, with other men who may have been or are in similar situations. Social media has been a big driver in the development of Andys Man Club, and you may have seen its #ItsOkayToTalk hashtag on social media.

On 11 August 2019, Thackley AFC is hosting a charity football match in memory of local man Gary Worby who sadly passed away recently. Funds raised on the day are being donated to Andys Man Club. The day is shaping up to be a great event, with some amazing raffle prizes already donated by celebrities and sports stars. The bar and tea bar will be open, and we hope many are able to join us from 12noon onwards for this event.

Thackley AFC has also received a donation which will see Andys Man Club and #ItsOkayToTalk on the back of the Men's First Team new Home and Away shirts. The kits are currently being manufactured and should be here shortly for the new season. The aim is to continue to raise as much awareness as possible for this issue and the charity.

Thackley AFC will also be fund raising throughout the season for the charity, so do look out for further announcements and events. You can learn more about Andys Man Club at http://andysmanclub.co.uk/