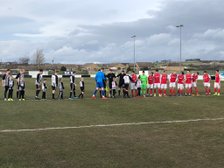 Penistone and wind too strong for Thackley.

After over two weeks without a game, Thackley were playing their second in five days when they travelled to Penistone on Saturday. Penistone are currently occupying one of the three promotion places and had lost just once in their last seven games. Thackley were coming into the game on the back of a 2-1 defeat at Knaresborough in mid week. Changes were made and there were no places in the starting eleven for James Rothel, Jack Normanton, Albert Ibrahimi or Simon Poole. In came, Loz Hunter, Ray Sibanda, Adam Muller and new signing (from Garforth Town) Sean Hunter.

From what had seemed like perfect conditions, weather wise, a strong wind had developed for the start of the game which would make playing conditions very difficult. The home side had the wind’s assistance in the opening half but it was Thackley that created the first two opportunities. Seb Scaroni testing Max Dearnley in the first minute, and Ben Grech-Brooksbank ten minutes later, the keeper getting down well to save. The wind was causing havoc with play, the ball spending as much time off of the pitch as it was on it. Penistone looked particularly dangerous from corners, they are a big side and the wind helped curl the ball into the danger area, the Thackley defence however stood firm. Paul Whiteley nearly caught Dearnley out with a lob from long range but the ball bounced over the bar. The home side took the lead just before the half hour, Luke Stewart broke down the right and crossed for Nathan Keightley to fire past Luke Wilson. Penistone started to take control of the game and with the wind’s assistance pinned Thackley into their own half. They created a couple of half chances but, just before the break, Wilson made a great save. Cameron Simpson’s deep cross found Stewart coming in at the far post, somehow the Thackley keeper managed to block his shot from just a yard out. Wilson had a couple of more shots to handle before the break but Thackley went in just one goal behind. They had the advantage of playing with the wind in the second half.

Keightley brought another fine save from Wilson at the start of the second half. However, Thackley were starting to see more of the ball and Ben Grech-Brooksbank found Sean Hunter, Dearnley made the save. Thackley were trying to play the ball on the ground but the wind and the home defence were making it difficult to create anything. A swirling long range effort was pushed around the post by Wilson as Penistone look dangerous on the break. Jack Normanton replaced Owen Murphy, as Thackley attempt to change things up front. With twenty minutes to go Wilson kept Thackley in the game, coming out to block Keightley after he got clear, the ball broke towards goal but Kris Hargreaves got back to clear. Grech-Brooksbank gave way to Albert Ibrahimi as Thackley looked to break down the home defence. The away side are having quite a lot of possession but finding it difficult to test the home keeper. Thackley make their final change, Lewis Waddington replacing Ray Sibanda. However, it is Penistone that come closest to getting the next goal, Keightley’s free kick from outside the box rattling the post. Scaroni picked up a late booking but Penistone held on to secure all three points.

The strong wind made it difficult for both teams to play any sort of controlled football, Penistone created the better chances playing with and against the wind. Luke Wilson made two or three really good saves to keep Thackley in the game until the final whistle.

Next up for Thackley is the short trip across Bradford to play local rivals Liversedge on Tuesday night. Another tough game against promotion contenders.