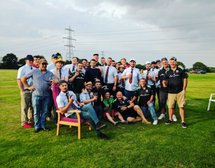 Continuing the Thames team rebirth, this week they travelled by coach to play Lakenham Hewitt in Norwich, for their 2nd pre-season match. Due to the bank holiday Thames was only able to call upon 15 players to make the trip but confidence was high after their first win of the season last week.

Senior game debuts were handed to Max Clarke, Billy Casbolt and Sam Casbolt, proving that Thames is looking very much to the future of the club and team. It was one of the debutants that opened up the scoring after 12 minutes of frantic play by both sides. Thames was awarded a penalty about 22 metres out from the Lakenham Line. Thames forwards took the ball on and after two quick recycles the backs spread the ball wide to Clarke on the wing, who just had to step over to score his 1st try.

Lakenham pushed Thames hard from the restart and only an error saw them give up possession of the ball just on the Thames 22 metre line. A quick tap of the penalty and a long pass to Clarke and he set off for the Lakenham try line. His pace and side step carried him passed four Lakenham defenders and he touched down under their posts. Matthew Cullen stepped up and added the two extra points.

The next try came from a scrum inside the Lakenham half. Thames had conceded the scrum after a timing error at an attacking lineout, determined to make amends the Thames front row combined to win the ball against the head. Liam Smith at 8 took the ball from the rear of the scrum and accelerated down the blind flank. Making good ground Smith drew the attention of several tacklers but off loaded to Wade Norton just in time before he was wrapped up. Norton's powerful crash into the Lakenham line created a hole for Smith back on his feet to run through but only after Norton had delivered a clever one handed flip pass, Smith finished the move with the try.

At half time Thames led their hosts by 17 points to nil but the game was closer than the score told.

The 2nd half started off well for Thames, when forwards Wade Norton and Edgar Juska combined to break through the Lakenham defensive line, as with pretty much every move in the first half Liam Smith got involved with the final ball being passed onto Clarke, who skirted around the final defender to score his hat trick. Thames started to control the game now and was putting together some great interlinking play between forwards and backs.

Forcing Lakenham back, Thames were controlling the pace of the game with scrum half Lloyd Marriott directing events. Marriott at one attacking move, sold the perfect dummy pass stepped back inside to open his try account for the season.

Lakenham restarted the game and Thames gathered the ball quickly, passing through the hands to open out play. Smith not wanting to miss out on any move that Thames ran, took the ball at pace and sprinted through the Lakenham line, managing to stay ahead of the pursuing defenders to touch down under the posts. Cullen had no trouble in adding the extra two points.

Thames was soon back in the Lakenham half and heading towards their host’s try line. Smith once again central to the attack and seemingly being able to pull out every skill from his kit bag, this time kicked cross field. Daniel McConnell was chasing hard to get under the high ball and his close attention to the Lakenham back was enough for him to fumble the ball and McConnell pounced on it to score.

With 20 minutes still to play and the game won Thames couldn't relax as their hosts were still hitting hard and looking to open their own scoring account. It was Thames though that scored next with a move straight off the training field. Captain Daniel Proctor called a full attacking move off an attacking scrum. Marriott from the back of the scrum popped to McConnell who held his nerve and timed his pass to perfection onto Proctor. Proctor with options left and right went back inside to a rampaging Norton who smashed his way over the line.

As the game came to a close Lakenham camped themselves on the 5 metre line of Thames looking to break through. Thames was over keen of several occasions being found off side and having to stand on the line to defend. Lakenham could have been forgiven for appealing for a penalty try but full credit to them they stuck to their task and tried to get an outright try. Sadly for Lakenham they went one move too many and the committed Thames defence turned over the ball. Only metres from their line there was only one play to give the ball to and Clarke didn't disappoint, sprinting the full length of the pitch to score. With time now up Clarke dropped kicked the conversion bringing the final score to 51 - 0 to the visitors.

There was only one person that Thames could award man of the match to as he had been constantly involved in attack and defence plus picking up two tries of his own, Liam Smith had produced an outstanding game.