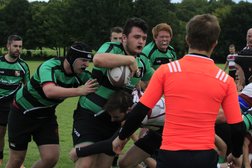 Thames grab a friendly match when league opponents pull out

League game won and a chance to try something different

With league opponents Ilford 2s unable to field a side for their league visit to Garron Lane, Thames accepted an invitation to play Brentwood 3s at St Georges Playing fields. Thames made the decision to rest a few players and give their new younger players the lion share of the game time, and a 1st senior debut was handed to Marcus Edgeway.

Thames scored first after Max Clarke showed a bit of true brilliance and speed. Thames defending against an early Brentwood attack turned over the ball on their own try line. Clarke taking the ball behind his own posts practically danced through the Brentwood tackles heading towards the opposite end of the pitch. With cover tacklers coming across field to intercept him, Clarke put boot to ball and kicked ahead. The last Brentwood defender tried his hardest to shoulder charge Clarke from his line of run but despite doing his best, Clarke just changed gears, tapped the ball on further and came crashing down on it over the Brentwood try line, a full end to end run. Kyle Munro stepped up and added the extra two points.

Thames line up was a very different setup from the previous three games and their usual calm controlled play was not evident, Brentwood was able to capitalise on this and by half time they had managed to exploit Thames' defence to score two converted tries.

Straight after the second half Thames had to replace two players in quick succession and this forced further line-up changes and uncontested scrums. Both teams continued to battle hard but frustration was building from both sides and it was Thames discipline that was first to go. With a yellow card shown for Thames, frustration grew and the yellow was turned to red, taking Thames down to 14 players.

Despite the reduction in numbers Thames was defending hard and determined not to just hand Brentwood the game. For Thames their strong defence turned into attack and Chris Ola powered his way through several tackles to run clear under the Brentwood posts. Clarke took the kick and brought Thames back to all square.

The game closed out with neither team being able to score again, the final score 14 apiece.

Thames handed their man of the match award to their debutant Marcus Edgeway, he was involved in so many of the attacks and defence moves that contributed to the Thames part in the game.