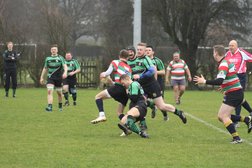 Thames came from behind to seal a a cup final place

A bitterly cold day saw Thames travel to Ilford for the Semi Final of the John Adler Cup. After a delayed start due to both teams waiting on players stuck in traffic the game got underway at a frantic pace. It was Thames who opened the scoring after 11 minutes of play when they were awarded a penalty and Marcus Edgeway was unstoppable crashing over the line.

Ilford struck back with a try of their own from a penalty move and added the conversion to take the lead buy two points. Minutes later Thames were reduced to 14 men and had to dig deep to keep a determined home side at bay. Thames defended hard until just up to the whistle of the first half when Ilford managed to find the overlap and ran in under the posts. With the conversion added Ilford led at half time 14 -5.

Just after half time Thames were restored to 15 men and immediately struck when a back line move saw Reece Cunningham cutting a superb line through the Ilford defence and touched the ball down behind the posts. Lee Cairns had no trouble adding the extra two points, 14 - 12 to Ilford.

Thames was now in their flow and playing some great rugby but Ilford were defending hard and kept their visitors away from their try line. The constant pressure was eventually too much for Ilford as the ball was passed through the Thames back line. With both wingers Rhys Dell and Max Clarke joining up on the left wing, Dell delayed his final pass to Clarke just enough to give Clarke the space that he needed to use his pace and step to be able to dive over the line.

Thames in the second half was using the wind to great affect keeping Ilford pinned back around their 22 metre line. Keeping the pressure on, one of Ilford's clearance kicks into the strong didn't gain the ground they needed and Thames had an attacking lineout just over 5 metres out. From the lineout Thames caught and brought the ball down, all 8 forwards formed the rolling maul and surged their way forward over the try line to score Thames’ fourth try taking them 8 points clear, with only 10 minutes to play.

With the final whistle blown Thames had taken the win 14 -22 and a place in the final of the John Adler Cup, in only their first season back playing rugby. Thames awarded their man of the match to young scrum half Matthew Hook who controlled the forwards and delivered perfect ball to free up the backs. Hook also came close to scoring with a quick dart down the side of a scrum and pushed Ilford back with some clever box kicking.