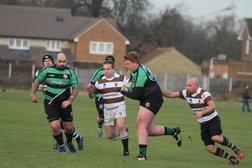 An impressive performance by an on fire Thames side

The first return fixture of the season and Thames were looking to right the wrongs they felt they had been dealt when visiting Southend in September and they showed their intent from the start, with a try and conversion in just 30 seconds. Liam Smith caught the kick off and the ball was shipped wide to Max Clarke who's pace had no match in the Southend defence. Lee Cairns added the extra two with an excellent kick.

The stage was set for Thames and they used every opportunity they found, with Max Clarke and Rhys Dell taking turns in scoring the next four tries in under 10 minutes. With Liam Smith collecting every restart drove Thames forward and set the base for the coming tries. All four tries had something else in common, Thames' clinical support play, they moved the ball with speed and had forwards and backs all linking the phases of play. Cairns had brought his kicking boots and no matter where the ball was touched down he dissected the posts. With Clarke already on a hat trick it was Chris Ola that was next to get his name on the score sheet with a powerful run dodging through the tackles and run around behind the posts for the sixth try, Cairns made light work of the conversion.

Before half time came it was another Clarke and Dell double act, with Clarke picking up his fourth Try and Dell scoring his hat trick. Both players were enjoying the hard work of their team mates and with both out pacing and stepping their opposition, they appeared to be unstoppable. Not to be out done Cairns matched his team mates with 100% conversions in the first half.

At half time Thames had a lead of 56 - 0 but despite the score line Southend had been playing some very good rugby but the Thames defence was rock solid and managing to isolate the Southend attackers, it allowed them to turn over the ball time and again. At half time Thames brought on fresh legs in Marcus Edgeway and Luke Edwards for Jack Price and Edgar Juska both had been outstanding in the first half.

The first half scoring had been all about the finishing of the backs but now the forwards got involved with a try from prop Jody Whittaker, who barged his way over the try line in the far corner. Cairns was close with his effort but it was just short. Thames were in control of the game and when they started to ring the changes from the bench the side didn't weaken they continued in the same vain. Paul Brassel, Richie Gilbey and Billy Gibbs took to the field with still 30 minutes to play making an immediate impact through the forwards.

Ryan Edgeway was next on the score sheet when he broke free after three powerful forward phases, his cut back angle then straight run for the posts had the Southend defence off balance, with Cairns back on target. Dell having scored three tries already matched Clarke with a quick dummy pass, cut back inside and a sprint to the line. Ola now wanted another try and he worked hard to get it, Southend valiantly through their bodies into the tackles but Ola was just too strong to be stopped. Only for the 2nd time in the match Cairns just missed the conversion.

With the time almost up Southend looked like they might get something for their determined and persistent efforts but were thwarted once again. As Thames forced the turn over it was Edgeway to run in his second try and Cairns to add the final two points on the stroke of full time.

Thames had managed to stop their visitors scoring picking up their first shut out of the season. Liam Smith, Thames' match day Captain had lead from the front, being involved in pretty much every try and making sure his side stayed focused to the end, so it was an easy choice for Man of the match.