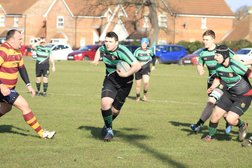 Thames heat up Garron Lane in the Baltic weather

Thames showed their quality and strength in depth when Westcliff visited Garron Lane to play the penultimate league game of a season that saw Thames rugby resurrected from no rugby to league contender. With almost as many players out injured or unavailable as there was on the team sheet, Thames took to the field knowing after last week’s disappointing game they needed to restore their confidence and they certainly did that in abundance.

Thames ran in 16 tries to Westcliff's one, with Max Clarke scoring 8, Rhys Dell a hat-trick and converting 15 out of the 16, with Liam Smith, Matthew Vallis, Reece Cunningham and Chris Ola all getting their names on the score sheet as well. The Thames performance was for the whole 80 minutes something to admire, the forwards competed well against a strong experienced well drilled Westcliff pack and gave the Thames back line the time and space to they needed to really show what they can do.

Despite the score line Westcliff did not sit back and let Thames have it their own way, the visitors to South Ockendon gave as good as they got, strong forwards play, technical set pieces and reacting quickly at the break down made sure that Thames had to stay focused to the job in hand. The competitive attitudes on the pitch gave the large crowd standing in the biting wind something to keep them warm and cheer on. At the end of the first half Thames lead 28 - 3 with the wind behind their backs but by the end of the second half running into the strong freezing wind Thames had opened the score line to win 110 - 8.

Thames awarded their man of the match to Rhys Dell playing at inside centre, Dell was intricate to all Thames plays, scoring three times and kicking all but one of the conversions. Next week see Thames welcome Ongar RFC for the first time to Garron Lane in the final league game of the season.