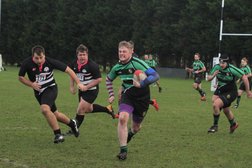 Thames do the Double in the local derby

From the kick off Thurrock penned Thames back into their half, with Thames working hard to try and break out but Thurrock fended off each attempt. After 4 minutes of constant pressure Thames were awarded a line out. Sean Loughran found his jumper and the ball was tapped down to Rhys Dell who fainted to pass then broke free through the Thurrock forwards. Dell continued his jinking run until he couldn't go any further at which point he passed onto a charging Max Clarke who outstripped the Thurrock full back to run in under the posts. Lee Cairns composed himself and added the extra two points.

Thurrock's attacking line was quick and well drilled but Thames defence was a match for its hosts keeping Thurrock away from their try line. Thames was having to defend as Thurrock clearly had the greater share of territory but Thames also did make some strong breaks into the Thurrock half. Off one of Thames’ breaks they put together a move that left the Thurrock defence wrong footed but the finishing didn't match the play as the ball was dropped in the process of scoring. A scrum was awarded to Thurrock on their 5 metre line but unlike previous scrums Thurrock's control let them down and the ball shot out and over their own try line. Scrum half Riaan Booysen reacted before anyone else pouncing on the ball to score Thames 2nd try.

At half time Thames lead 12 points to nil having defended for large parts of the half but having made better use of their breaks.

As Thames got the 2nd half underway they put a lot of pressure on Thurrock and turned over the ball. As Thames broke forward Thurrock managed to stop the attack but a quick recycled ball kept the move flowing. As Thames continued to attack Captain Dan Proctor carried the ball back into the frenzy of players as he attempt to fend off a defending Thurrock player, he collided with the players nose and the official, although accepting it wasn’t intentional had no choice but show Proctor a yellow card for the collision.

Now down to 14 men Thames had to regroup and defend even harder but the best form of defence is attack and that is exactly what Thames did. Pushing forward Thames drove Thurrock back and forced their hosts to give several penalties away. With the momentum in their favour Thames' Marcus Edgeway drove over the touch line and placed the ball down on the Thurrock line however the try was deemed to have been held up. With a scrum 5 metres out it was Mark O'Connell who made sure that there was no doubt that Thames had their third try of the match.

As Thurrock kicked off Thames caught the ball and moved it from wing to centre quickly. Ryan Edgeway straightened up the charge and powered his way through several Thurrock attempted tackles. As Edgeway continued his run he drew in two final defenders amd then passed onto Chris Ola who sprinted around the remaining defenders and scored by the Thurrock posts. Cairns added the extra two points with ease.

Thurrock had played well during the game and when they crossed the line for their only try of the match it came from a good set of forward phases but with only 9 minutes of play remaining it was too little too late. Local derby’s are normally tense affairs and with five minutes remaining Thurrock's discipline boiled over when they were shown a yellow card for poor conduct at the break down.

Thames as they did in the first game took all the points for the win but it was a tough match. Thames Man of The Match was awarded to Mark O'Connell as pack leader he lead by example with some strong runs, massive defence and all topped off with a try.