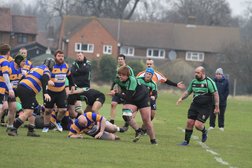 Another solid display of rugby at Garron Lane

Thames started off strong with a first try in just under two minutes when Rhys Dell broke free straight through the middle of the Upminster line, Dell added the extra two points with the conversion kick. Upminster hit back after only a few minutes when Thames poor discipline gave their guests an easy penalty kick.

The second Thames try came from some fantastic support running between Edgar Juska and Mark O'Connell, the pair drew Upminster players left and right popping back and forth between each other. David Sullivan was on hand to switch the ball out wide and score with a final charge through the defence. From the restart Juska caught the ball and charged forwarded. Fending off several Upminster tackles Juska broke into space and off loaded to a sprinting Kyle Munro who scored under the posts. Dell made light work of the conversion.

Upminster were next to score off the back of a scrum just outside the Thames 5 metre line when they broke quickly and spun the ball wide. Having conceded a try from a scrum Thames next try came the same way as O'Connell broke free ran blind and over the try line. Dell again added the two points. Thames weren't finished with their try tally for the first half and it was Chris Ola who completed their fifth try when he out sprinted and stepped the Upminster defence, Dell added the fourth conversion. At half time Thames lead their quests 33 - 8.

Thames started the second half as they had the first, O'Connell receiving the kick of f and running straight back through Upminster and over the try line. Dell had no problem with the kick. It wasn't long before Thames were celebrating another try this time it was a combination of forwards on the attack, led by a powerful run from O'Connell who passed to Jack Egar who charged forward and popped up to Marcus Edgeway who ran clear under the posts. Again Dell was on target with his kick.

Upminster had come to make a game of it and despite the score line they were attacking Thames at every opportunity. For their efforts they scored their second try from a well worked penalty move but couldn't convert. Thames restarted the game with a good chase placing Upminster under pressure. To clear their lines Upminster put boot to ball and it was an extremely good kick, turning Thames to chase back behind their own lines. Thames' winger Ola was under pressure almost immediately but his superior feet work got him out of trouble and started running from behind the Thames try line. Full Back Max Buckley was on hand to help out and took the ball into the centre of the pitch, passing on to Hooker Sean Loughran. Loughran had a clearer run and made good ground, seeing that he was drawing the Upminster defence Loughran launched a long pass to O'Connell who ran from just outside the Thames' 22 metre line to score his hat trick. Dell was accurate again.

From the kick off Luke Edwards found himself with ball in hand and he had only one intention a straight run to line which resulted him placing the ball down under the posts giving Dell an easy conversion kick. It is never a good idea to under estimate Upminster as they are a side that stick to their task and they scored two fast tries firstly using the width of the pitch and the second a good old fashion smash it up through the centre with a conversion to follow.

Thames had started the scoring in the first few minutes of each half and it was winger Chris Ola who scored for Thames in the last minute with a scintillating run through the Upminster back line. The final score was 66 - 26 in favour of Thames but a game where both teams had played some very good rugby. Thames awarded their man of the match to Jack Egar for his powerful running, delicate timely passing and some very good tackling.