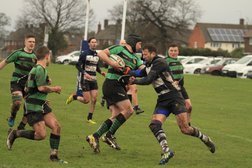 A thriller of a game

Thames are edged out with 3 minutes to go

The previous match between these two sides was a great game and everyone was expecting another tight one, they were not disappointed, what they witnessed was a classic battle between two sides in form.

Chelmsford had the first chance to open the scoring with a penalty but it just sailed passed the posts. Thames attacked back and through their backs they managed to open the scoring. Rhys Dell found a line through the Chelmsford defence and off loaded to Max Clarke who stepped and dived over the try line. Being wide out Lee Cairns just couldn't add the extra points.

Chelmsford response was almost immediate when they worked the ball between the forwards and backs, pinning Thames back they crashed over the line to level the score. Chelmsford also missed their conversion. Literally two minutes later Max Clarke had the ball in his hands once again when Daniel Proctor broke through and loop passed onto Clarke. Clarke still had three players to beat and he stepped his way to his 2nd try. As half time came Thames held a very fragile lead after a very close and competitive first half, 10 -5.

Chelmsford brought the score line back to level after 8 minutes of play in the second half when they found space in the Thames defence and then took the lead when the conversion was kicked over. Chelmsford was pushing hard and they scored again off a well worked scrum but with no conversion they lead by a narrow margin of 7.

For ten minutes both sides kept battering each other in attack and defence, every player was giving everything. It was Thames who scored next when they found space out wide. Edgar Juska sprinted down the wing, having to fend of three strong attempts to bring him down, he managed to touch down directly behind the post making the conversion for Cairns easy.

Now level it was Thames who managed to get their nose back in front when David Sullivan finished off a strong Thames forward play, Sullivan's strength saw him smash his way through and over the line, but Cairns just missed the target. Thames now just 5 points ahead they were put under immense pressure by Chelmsford. With only three minutes to go Chelmsford managed to suck Thames in and find the space they needed to get the levelling try. As the Chelmsford kicker lined up the posts everyone was silent, Thames players and supporters holding their breath praying for a miss whilst Chelmsford's players and supporters willing the ball to go straight and true. The Chelmsford kicker was calm and accurate giving his side a 2 point margin.

The final score ended with Chelmsford taking the win 24 -22; however both sides had nothing but praise for each other after such a monumental battle. Thames awarded their man of the match to Rhys Dell he was instrumental in Thames' attack and defence.