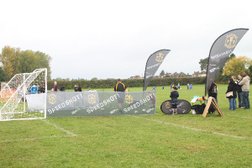 1. Proud Supporters of the Local Community

Thatcham Tornadoes have joined forces with Newbury-based company, SPX, and together are delighted to support the local community and charities by using the thrill of the Penalty Speedshot to raise money for charity.

The speedshot first made its appearance at the 2013 Thatcham Tornadoes Tournament where £627 was raised for Fanconi Hope in memory of former Tornadoes Supporter, Coach and Manager, Stephen Waters, who sadly passed away in January 2013.

Since May 2013, Thatcham Tornadoes SPX have taken the speedshot out to events in the community to help raise money for local charities - over £1,700 has been raised so far.

A huge thank you must go to the Tornadoes Managers and Coaches who have freely given up their time to run the speedshot at the various events and to the public for stepping up and having a go and raising money for some extremely good causes.