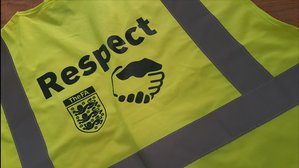 RESPECT STEWARDS AT ALL PHYL MATCHES
Both home and away teams will need to supply a RESPECT Steward (parent/supporter) at every match. The PHYL have supplied all teams with RESPECT hi-viz jackets which the PHYL managers should now have.

Both these initiatives have been used in several Hampshire leagues for a number of seasons, to great success by all accounts.

PHYL - RESPECT LINE CHANGES
For this season the RESPECT Line should only run from the half way line to the goal at the opposite end to where the linesman operate. This will mean that all supporters will be stood along 1/2 pitch only (rather than along the length of the pitch).

This will ensure that linesman is free to run the line without interference and barracking.