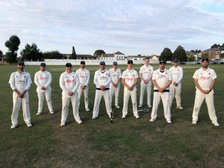 Congratulations to the 2s who came out winners of the 2nd XI Clubbie Cup played between Leeds & Broomfield, Tenterden, Gravesend, Dartford & The Mote. Well done to James Hodgson and all the players that featured in the games resulting in the league win at the close of the shortened season.

The 1st XI also had a 2nd place finish in the 1st XI Clubbie Cup which was played against the same opponents.

Despite a Covid-19 hit season it was great to see the club feature fixtures for up to 5 Saturday sides at times, successfully getting games for our growing membership that we didn't think was possible at the start of the summer. In addition to our Saturday sides we had the introduction of our LMS team. The LMS side lead by Phil Apps managed to win the Kent final and will be through to the national phase of the competition which will take place at the start of the 2021 season. Well done to all the players that have featured as we look to add a 2nd LMS side next year due to the popularity of our first season.

Thank you to all the work that has gone on behind the scenes to make this season possible. The groundstaff have worked incredibly hard to fulfil an influx of fixtures as all Mote sides, colts age groups and external parties looked to fit as much cricket into what was left of the summer. The captains have strived to select sides and support the players in achieving the games that we have managed to get on, from 1st XI to 5th XI as well as Sunday and Midweek games. A special mention must go to James Marriott who after 2 years of 1st XI captaincy has decided it is time to step aside. James has been a big part in bringing in more players and working with all sides which resulted in the formation of our 5th team.

The committee worked alongside Maidstone Rugby Club and Carol whilst running the pavilion to ensure that all parties were safe and following the government protocols in order to get cricket and sport on. A big thanks goes to all those that were involved in this work.

Thank you for being a part of this 'different' season and we look forward to seeing you all again next season when hopefully we can get winter nets underway and a full season in 2021!