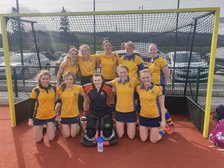 Skipton are the hosts for a final Thirsk victory.

This Saturday Thirsk played their final league match of the season away v Skipton. Thirsk were sitting in 3rd position in the table but could be overtaken with anything less than a win so were determined to finish on a high. The match was played on a bouncy pitch which Thirsk took time to adjust to but soon got into their stride. The midfield were able to make runs through the middle of the pitch but Skipton were strong in defence and made it difficult for Thirsk. However the pressure paid off midway through the first half with a good run to the back line and a turn and shot into the bottom corner. When Skipton attacked Thirsk the defence of Molly, Lynne and Fletch were strong and cleared the ball up the pitch. Chelsea was also sharp in goal, being quick off her line to clear any chances that did fall to the Skipton forwards. The half time score was 1-0.
The second half was quite scrappy at times with both umpires blowing their whistles frequently making it hard for either team to get any momentum. Skipton equalised with a flick from the left side which snook in at the post. Thirsk were still fighting to get a win however and started to take control with better passing throughout the midfield of Grace, Hattie, Libby and Naomi. After a good run down the right side the ball was played to the left post where Hayley was on hand to put the ball into the net. With the final whistle approaching Skipton tried to attack one final time but Thirsk held firm to secure a 2-1 win and 3rd position in the league. Player of the match was awarded to Chelsea for her great goalkeeping.
Share via
FacebookTwitter
https://www.thirskhockeyclub.c
Recent news