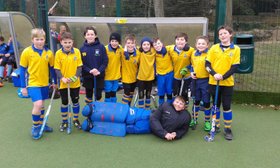 They made their Mothers proud!

The fixtures secretary must have been having a laugh…. First Valentine’s Day and then to top it off, Mother’s Day. The irony was not lost on me either when on the touchline it was largely the Mothers supporting their sons. Well done Mums!
So, to the hockey; having made it through the North Yorkshire round, Thirsk now had to try and get past the best that Yorkshire had to offer. Thirsk had a strong squad but lacked experience between the sticks as Fred Hunt had volunteered to step in for the ever consistent, yet absent, Dan Garlick and don the pads for the first time. Thirsk started brightly against a good Ben Rhydding side with some superb penetrating runs from Alex Glegg. The boys very nearly broke the deadlock but sadly Ben Rhydding stole the points as they weaved their way in for a 1-0 victory. Thirsk however took the positives as they had started very well, were unlucky and Fred had made some good saves giving the defence confidence.
After a break, Thirsk were up against Driffield who took an early lead. All the more credit due then to the boys for the manner in which they responded. Some battling by Jonty Moorhouse, who had just come on in the midfield, resulted in a pass that released Alex on a run. Alex went on to hit the ball very sweetly past the Driffield keeper, 1-1. Some very tidy hockey by Joseph O’Gorman down the right flank again released Alex who delivered a perfectly weighted pass across the face of goal to Joe Tart who gratefully tucked it away. Thirsk were now in full flow and playing undoubtedly the best hockey they had played all season. Fittingly, it was Jonty (on a magnificent debut for the U12s) who scored the 3rd goal after a brilliant driving run by the centre back George Hunt. The game finished 3-1 and tails were up.
Thirsk went straight into their 3rd and final fixture against their toughest opponents of the day, Doncaster, who had been scoring a plenty already. Despite some heroics from Joseph, George and Ollie Merrin and multiple saves by Fred, Doncaster took the lead and went on to win 2-0. Thirsk went close through efforts by Joe Tart, Jack Foxley and Alex but it wasn’t to be; they would not progress to the northern finals this time out.
Every member of the Thirsk team can be proud of their efforts even if they are not mentioned in this report as it was truly a team performance and everyone contributed. As ever though we need to single out those who played particularly well. Alex was rightly chosen by the players as their man of the match. Fred for his willingness to give goalkeeping a go and for giving it a very good go was my player of the day. Next Sunday we shall try and get promoted to Div 1 of the YYHL to finish the season on a high. If we play like that then we are in with a good shout. Thanks to George Hunt ‘the elder’ for umpiring.
Well done boys and thank you Mums!
Team: Fred Hunt (GK), Joseph O’Gorman (C), George Hunt, Teddy Hunt, Ollie Merrin, Owen Reed, Jonty Moorhouse, Jack Nicholls, Jack Foxley, Joe Tart, Alex Glegg.
Share via
FacebookTwitter
https://www.pitchero.com/clubs