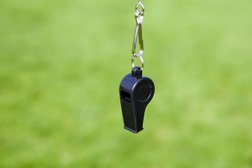 The under 12 boys field a minimum team of just 7 but manage to produce some winning results.

Players: Dan Garlick (GK); Fred Hunt and Owen Reed (defence); Joe Tart, Jack Nicholls and Ollie Merrin (midfield); Rafi Carus-Huby (forward)
• Thirsk 2 – 0 Driffield
• Thirsk 1 – 0 Bradford
• Thirsk 0 – 0 Chapeltown
• Thirsk 0 – 1 Northallerton
• Thirsk 0 – 0 Harrogate B
Thirsk started the tournament fast and in the sixth match of the season, finally found the back of the opposition goal, not once, but twice, through Jack and Joe. Thirsk dominated the match with some excellent passing on the move between Ollie, Rafi, Jack and Joe. In the few instances when Driffield managed to cross the half way line, Owen was able to break the attacks down and Fred showed some nice skills playing the ball out of defence to the midfield. The second match followed a similar course, although Dan had some work to do in goal, coping with the occasional shot well, and playing controlled clearances out of the ‘D’. Rafi scored to give Thirsk 2 wins from 2 games. Thirsk probably should have won the third match as well, but were unable to put a goal away despite some near misses. Once again, the defence managed to cope with most attacks, as Owen was kept busy covering back when the opposition broke through. The fourth match was quite even, but Thirsk did not really get into their stride, and eventually lost a scrappy affair by the only goal, after playing the last few minutes with a player missing and makeshift defence. With the benefit of an ice pack, Thirsk managed to field 7 players with Fred as a stationary striker due to his injury. The tactic did not really pay off as Thirsk were unable to find him with a long ball, as Harrogate kept up the pressure on the Thirsk goal. Jack, Owen and Dan did a great job ensuring another clean sheet as we finished with a second draw after conceding just a single goal in 5 matches.
All 5 matches were competitive with action at both ends and all the players contributed well to the team performance in each match, making it difficult to pick out a single player. However, for his ceaseless work rate covering opposition breaks, putting strikers under pressure when they were trying to shoot and his tackling back if the first tackle was missed, today’s player of the tournament is Owen Reed. Thanks to everyone for making the effort and look forward to more success in November.
Share via
FacebookTwitter
https://www.thirskhockeyclub.c