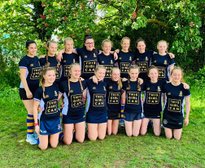 Thirsk U14 Girls at Nationals!

Great result for the U14 girls.

Sunday 12th May saw Thirsk Hockey Club take part in the England Hockey U14 Girls National Championships at Reading Hockey Club. They were there competing against the top teams in the country most of which it is fair to say are from “down south” and are huge in comparison to little old Thirsk HC, so just being there was a fantastic achievement for this team.
The girls had three tough matches to get through on a very sunny day in Reading, incredibly different conditions for them to deal with especially with the large amount of supporters for all the other teams as it was pretty much on their door step. However, Thirsk had an amazing party of followers doing their best to show support for the girls………………the Thirsk army marching on together!
Through some very generous sponsors, the girls also turned up looking wonderful with Barkers of Northallerton providing some beautiful coats and another sponsor providing new home and away shirts. Things like this can make such a difference to the girls on the pitch so it was a great surprise for them, especially the positive message emblazoned across the front of the shirts, #thisgirlcan.
So three tough matches for the girls against the best in the country, our stand-out game was against Surbiton HC, the biggest club by far in the country, full of junior and senior internationals and the eventual winners, they had been thrashing all before them. One parent over-heard their team talk beforehand, which let us just say, was less than complimentary about us. Thirsk were on fire in this match and causing them all sorts of problems, their girls could not believe what was happening and started losing their cool in a big way, along with their coaches. The pressure told in the second half and they snuck two goals past us but then by a perfectly executed short corner routine, we got one back and they were terrified. The girls gave it everything and were so close to equalising but time ran out and so it ended a 2-1 loss. A genuinely awesome fighting performance from the Thirsk girls which everyone was incredibly proud of and a great way to finish the tournament. Other results in the same group were Marlow 3-1 (L) and Cambridge 3-0 (W)
So once again, this small market town in North Yorkshire has mixed it up with the best in the country, the highest the club has finished in any junior England Hockey competition, what an incredible performance and something the town should be very proud of, it has certainly put Thirsk on the hockey map!
This team has played approximately 38 matches this season, lost 3, drawn 1 but won 34, they have scored well over 100 goals and only conceded 9 across all competitions. They are England Hockey (EH) North Yorkshire Champions, EH Yorkshire Champions, Yorkshire Youth League Champions, EH North of England Champions and now the 5th best in the country..........................pretty awesome really! 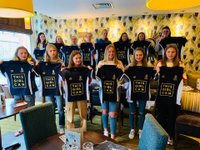 England Hockey report:
In an extremely close game in the U14 Girls Junior Club Championship, Surbiton secured a second trophy of the weekend as they defeated Sevenoaks 7-6 in a shootout following a 0-0 regular time draw.
Both sides progressed through their Pools undefeated, Surbiton winning all three matches in Pool B with Sevenoaks drawing one in Pool A with the teams looking strong as they advanced to the final.
Sevenoaks topped the goalscoring charts, Annabel Cheveley notching five of the team’s 12 goals, however were unable to find a way through a stubborn Surbiton defence who only conceded one goal throughout the competition on their way to lifting the trophy.
Should have added this was scored by Thirsk........