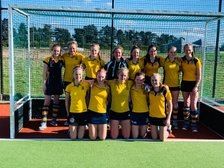 Thirsk U14 Girls off to Nationals!

A long journey does not reduce the abilities of this team.

Sunday 24th March saw the England Hockey Tier 1 North Finals for the Thirsk U14 girls - even though it was the North Finals for some reason it was held in Stourport, south of Birmingham!? Anyway that meant for a night away for the team who all enjoyed a cheeky Pizza Hut meal the night before in Kidderminster.

We had 3 games against Alderley Edge, Stourport and Bowden - we didn't have the kindest of draws as the first two matches, the hardest two, were back to back. We had also lost a couple of key players to injury before the tournament and there were a few walking wounded in the squad..........................not ideal preparation! However, I knew the girls were up for the challenge as the night before when the ever-vocal Eve stated that she was only there to win............................attitude is a little thing that can make a big difference.

So we started out with Alderley Edge, a fantastic team that pressed us so hard in the first half, they were all over us - our girls were not playing how they should and got sucked into a scrap. They never shy away from a challenge mind you and eventually the deadlock was broken with a fantastic run down the left, into the D and then reverse hit into the far corner................the relief from the whole team, the parents and me was palpable. Then it was half time and I realised then, we would be ok. All I can ask for as a coach is that they are capable of positive self-reflection and how to change the picture within a game to improve the outcome - yes we had a stern half-time talk but it was led by them, they knew where they were going wrong and how they could improve. Second half saw a different team, confidence from the first goal led to some lovely passing hockey being played, they looked so strong, we got another goal which took the wind out of AE and it quickly led to a third. Game over, 3-0 win, first job done!

We had a 15 minute break before the next match against the hosts, Stourport. I got the girls in and reminded them about the lull in performance that can happen from back to back matches and I could tell their heads were not in the right place, I was slightly nervous. So the first half started similar to AE, they were all over us again and we were not playing very well at all. Stourport with all the pressure eventually scored so we went into half-time a goal down. Again, with a little bit of direction from me, the girls knew what they needed to do, we changed the formation slightly and then we started again. Talk about a game of two halves, we were on fire all of sudden and we soon got the equaliser - this fired the girls up even more and they were all over them, soon getting a second. We then won a PC, I called our new routine (Number 6 - kindly on loan from Chris Booth and the L1's), it is only the second time they have done it in a match and they absolutely nailed it - an absolute cracker that was unstoppable. We then got another goal in open play and that was that, a 4-1 win. Second job done!

The only downside of this match was that Poppy took a ball direct on the end of her finger at pace - queue blood everywhere and some very loud screams, it was a very nasty looking injury. She was whisked off to A&E where after the nail was reset (yuk), with the help of a lot of laughing gas she went for an x-ray which showed a fracture and a potential lay-off of 6 weeks! Not ideal and we need her back asap so get well soon Poppy.

We then had over an hour off before our last match against Bowden, and no disrespect to them but we knew from the other results that on paper this should be our easiest match. What is it they say about complacency..................?

So we got the girls warmed up for the final time, I told them to take nothing for granted, this is their biggest match yet, win this and they are off to Nationals. If there is one thing I will take away from this tournament is how we start matches, we certainly didn't make life easy for ourselves! This was like the other two matches where we did not play well to begin with and we were making it so hard for ourselves. Poppy returned from hospital to tell me of her funny stories of what it's like being on laughing gas which took my mind off what was going on with the match.....................certainly no laughing matter! Thankfully, halftime came again and after some slightly more stern words than normal, they got themselves together and knew what they had to do. And so it happened again, we came out a different team and piled the pressure on with goals coming from all over - including another Number 6 PC not quite as well executed but with the same effect. We ended up 4-0 winners, queue celebrations for the girls and parents.

What an amazing achievement for this special group of girls – off to Nationals as one of the top 8 sides in the Country…………………..for a little town in North Yorkshire, that’s pretty special. I'm not going to pick out any of the girls, this was a full team performance - we had some lovely comments from the other coaches about the team and even from the other teams parents about what a lovely bunch they are.....................I couldn't agree more they are an amazing group who I am honoured to be able to coach.