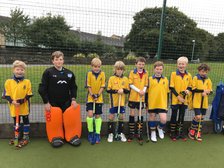 U10 boys keep a clean sheet.

Is 21 goals for - 0 against a reasonable mornings work?

The U10 boys took part in the first round of the YYHL competition on Sunday 6th Oct.
They were in division 2 for this round against 6 other teams, at Leeds Grammar School.
The weather had been forcaste wet, but in the end it was dry if a bit cool.
First game against Bingley Bees was fairly straight forward, a 6-0 win. We even took one of our players off before the end to try and make it a bit more even. A game off and then on against Slazengers.
It seemed to follow the previous game, 6-0 win. Again reduced the team after half way.
With 8 in the squad we were doing a "super sub" in each game to give all the players an equal pitch time.
Straight into game 3 against Leeds Adel. A bit more to do in this match, even Oliver in goal had a few saves to make. Still it was a 1-0 win. Two games off and then took on Wakefield, some more even play but Thirsk ran out 3-0 winners.
Then Ben Rhydding, and another straight forward contest, 3-0 win. So one game to go, Airedale who had a couple of useful players.
Team briefed and away we went, but with great marking and passing wide we achieved another win. 2-0.
So 21 goals for and none against, division one on the next outing.
In summary the play was classic hockey, strong marking, hard passing and wide, great crossing and killer finishing.
Looking forward to the next round. Great support from the parents and special thanks to Ewan for his coaching and managing.
Team was Oliver Q, Oliver McI, George R, Rufus W, Alistair B, Matthew W, Sam H and Thomas P-B.