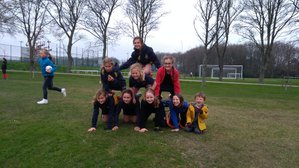 U10 girls in Northern In2Hockey finals.

Thirsk girls continue to impress at any age.

The U10 girls travelled back to Leeds this morning to compete in the Northern Finals of the In2Hockey cup competition.

First match up was Kirby Stephen. Thirsk made a bright start but found the Kirby keeper in fine form and struggled to build on their strong start. Lexi Ramshay finally found her way through and slotted past one home to make it 1-0. Thirsk continued to press but were unable to add to their lead in the first half. In the second half Thirsk continued to press and Lexi scored her second after Yolanda Secouet won the ball well on the left and played Lexi through who doubled Thirsk's lead. A third goal was soon to follow after Amy Hughes released Lexi who smashed the ball across the goal for Lily Fyfe to tap on at the far post.

The second game was against Fylde, with Thirsk looking to get one foot in the semis with a win. Despite some solid play from Emillia Sample in midfield Thirsk soon fell behind, Tilly Haigh unable to prevent a well taken short corner from slipping in past her. Thirsk pressed on and thought they had equalised when Amy Hughes set Lily Fyfe to slot in at the far post, but the goal was ruled out as the umpire had failed to play advantage and had moments earlier blown for a short corner. Despite near constant Thirsk pressure they were unable to make it pay off and were unlucky to lose.

Heading into the final match against favourites, Alderley Edge, Thirsk knew they needed a win to progress. We started brightly with Annabelle Mindenhall in particular making some good runs from deep, supporting the attack. Alice Dunkley was having a storming game in defence, but eventually Alderley Edge found a way through. Having played longer games, with shorter breaks than previously Thirsk noticeably started to tire. Their Cheshire opponents started to build some nice interplay and won a series of short corners. A mix-up in the defence on one of them allowed a shot to trickle into the goal, before they added a third after some good build up play left them with a extra player open in the D.

Despite going out at the group stage the team did themselves and the club proud today. Each of the girls played superbly and acquitted themselves well in some hard games against opponents a cut above those they normally play in the Yorkshire league matches. Both myself and Duncan have been very proud to have seen the girls come so far in this competition this season. Congratulations to everyone who has played for the team this season.