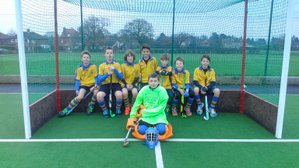 16th Nov sees a round of the Yorkshire Mini Hockey Tournament at Thirsk.

In the first game we were against Harrogate A team it was a very close game Harrogate were the first to strike making it 1-0, but after the goal we made a comeback when Sam was through on goal and managed to push it passed the keeper to make it 1-1, but unfortunately in the last minutes of the game Harrogate managed to score again making it 2-1 to Harrogate.
In our second game we were against York A team, this time we were having most of the possession but York were very strong in defence managing to keep our shots out but this chanaged when Sam received a brilliant pass from Arthur which split the York defence and then Sam coolly slipped it passed the keeper making it 1-0 to us after this York started to test Tom with some strong shots but Tom rose to the challenge and saved everything that they could through at him, the game ended 1-0 to Thirsk.
In our third game we were against Harrogate B team this was a difficult game, Harrogate started off strong wasting no time to go on the attack and we were put under pressure that eventually made us crack and they scored making it 1-0 after this we started stronger from the restart when Sam managed to score a solo goal that made it 1-1 but after this Harrogate woke up and then went back to all out attack scoring twice to make it 3-1.
In our final game against York B team we were unfortunate to concede a early but fortunately this inspired us to make a comeback when Arthur and Sam completed a brilliant one two pass which put Sam through on goal who coolly slotted it past the keeper making it 1-1 and then straight afterwards Arthur received a brilliant pass from James and then running through on goal and smashing it passed the keeper making it 2-1 to Thirsk and the game ended that way, overall we finished 3rd.
I would like to thank the parents for driving and supporting and Andrew McCann for umpiring .