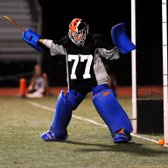 U12 boys have a tough day at the office.

Sunday 3rd January saw an early new year outing for the U12 boys.

In his first outing as team manager, Rich O'Gorman, set out with a fine body of young men, the U12 boys of Thirsk. Thirsk would have to play the best that Sheffield, Ben Rhydding, Northallerton and Harrogate could offer. Having only just been promoted to Div 1 after their last outing, Thirsk were always going to be the underdogs and we knew it would be a tough day at the office!
Sheffield were our first opponents and they started very brightly; Thirsk on the other hand were looking like they had just finished Christmas dinner and needed a sleep. Sheffield passed the ball with pace and were first to the ball for most of the match. Were it not for George and his gritty and determined defending, this could have been an embarrassing score line. Fortunately, only 1 goal was conceded and the game ended 1-0. A combination of stern words of encouragement and bribery (in the form of Quality Street) were used to try and prepare the team for the next game.
Ben Rhydding were our next opponents; Thirsk still looked sluggish and came second best in the majority of challenges. Even when Thirsk won the ball, the team seemed to be playing with feather dusters as opposed to hockey sticks and the ball was invariably tickled back towards the opposition (Ken Dodd would have been very proud). Again, were it not for some strong defending by George and the efforts of Dan between the sticks, the score line may have reflected a basketball score; as it was Thirsk kept it to a 3-0 defeat. There were some brief moments of sparkle with Alex going on a few probing runs latching onto the end of Joseph’s passes but once he was in a good position there was little support from which to try and produce a goal.
Back to the drawing board! It was time to shake things up a bit; Joseph was moved from midfield to RB and Jack Nicholls came into the centre-mid role. Thirsk badly needed width and Joseph and Ollie were reminded of my initial team talk; as there was only one midfielder, the LB and RB must get up to support the attack by running up and down the channels. Our neighbours, Northallerton were up next and they did not know what had hit them when Jack Nicholls set up Jack Foxley for quite possibly the quickest goal of the tournament (very well struck too!). The changes had clearly worked and Thirsk were now playing like a team. Everyone played their part with Joe coming on up front and Deacon, Ollie and Teddy sharing defensive roles. There were smiles all round as the final whistle blew as Thirsk had won a match (1-0) and deservedly so. Spirits were high and the players felt they had earned two Quality Street chocolates!
Arguably our toughest opponents were still to come and I knew that a strong team performance would be needed to keep Harrogate at bay. It was Thirsk however who took an early lead and had the lion’s share of the opening exchanges. Alex delivered a delightful through ball to Jack Foxley who coolly and stylishly rolled the ball into the back of the net. Teddy was taken out for the second time in the tournament by a flying ball, this time he took one hard to the elbow and despite it hitting the funny bone he understandably did not see the funny side; Deacon replaced him. Harrogate were clearly not going to roll over; they came back strong and were worthy of their equaliser. Lots of pressure then had to be absorbed by Thirsk as Harrogate pressed for a winner. A strong team performance and some outstanding goalkeeping from Dan resulted in Thirsk holding out for a 1-1 draw. The lads should be proud of this result as to hold this Harrogate team to a draw shows a real improvement in this developing Thirsk team. Although ultimately the team will be relegated to Div 2 for their next outing, they should be pleased (I was) with the way they fought their way back into this tournament. They went down fighting!
Dan very kindly offered to replace the Ben Rhydding goalkeeper after he got injured and played an additional game and a half for them (thank you Dan). Although Jack Foxley received votes for player’s player of the day for his two very well taken goals, Dan Garlick with his cool and calm saves was voted worthy of the honour. My (manager’s) player of the day was George Hunt as when much of the team was slow to get going in the first two games, he was alert to the threat and he continued to lead by example with some outstanding defending throughout. Special mention for Deacon who played well on his first outing for Thirsk; well done!
Team: Dan Garlick, Teddy Hunt, George Hunt, Ollie Merrin, Joseph O’Gorman (C), Joe Tart, Alex Glegg, Jack Nicholls, Jack Foxley and Deacon Laverick.
Share via
FacebookTwitter
https://www.pitchero.com/clubs