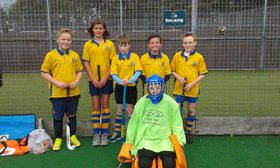 Under 12 boys B team first outing of the season.

October 26th saw the under 12 boys in their first set of games.

Sunday saw the first outing for the Thirsk U12 b squad, and they all played valiantly despite being a player short throughout the morning. The squad consisted of Josh Fisher, Lennon Brown, Sebastian Hinde, Ben Sherwood, Tom Hall & Freya Rae. Borrowing a centre forward from Wakefield, the team were unfortunate to go down 1-0 within the first minute, as most of the play was evenly split between the sides but Thirsk was unable to pull back.
The second game against Adel, saw a stronger opponent and consequently the team lost some confidence. Wakefield kindly loaned a second player on this occasion but the game was lost 4-0. Chapeltown were also a stronger team and although borrowing A squad player Arthur, the game was lost 0-3.
The final game was a more even affair, the first goal was only ceded in the second part of the game, and was an unfortunate own goal. Whilst Thirsk had a couple of chances in the opposition goal, they weren’t to be. The game ended 0-2. Thanks to Airedale’s players who stood in for us on this occasion.
All Thirsk players proved themselves and also learned a lot, they should be proud of how they conducted themselves over the morning. Special mention should go to Tom Hall for his keeping skills, whilst the games were lost he kept a lot of potential goals out.
Share via
FacebookTwitter
https://www.thirskhockeyclub.c
Recent news