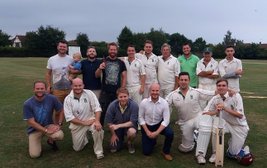 Thorley CC start with a win.

Losing the toss, Thorley CC were forced to bat in what, for many, would be the first time they had picked up their bats since the final game of last season.

Farnham applied early pressure dispatching the opening pair of Stuart Pack and Mark Dellow for just 4 runs before Rob Halls and Jamie Blackwell came in and steadied the ship. Their partnership of over 130 runs proved vital in setting a respectable total of 238, with Wes Eldred, Alex Dellow and Stuart Osborne, chipping in with important runs at the end.

With Farnham only having 9 players, Thorley CC required just 8 wickets to secure the game. Thorley CC’s openers Sean Pack and Jordan Griggs took two early wickets making the scoreboard look remarkably like the first innings. Steve Bird and Rob Halls continued to apply the pressure when they came on bowling their combined 19 overs for just 47 runs sharing 2 wickets each in the process. Jack Lamb came on towards the end taking 2 wickets from his two overs.

An overall great performance from the team and the winning start to the season we required.