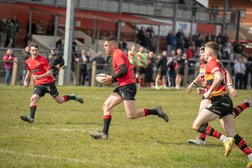 Thornbury finished the league season in an entertaining dead-rubber at Bridgwater where Thorns played with one eye on the forthcoming cup final.

Although Thornbury lost they demonstrated they can run most sides ragged when they play to their strengths, and gave Bridgwater a torrid second quarter before the Somerset side focussed on their goal of securing points to maintain their fourth place in the table and used their forwards to secure victory in the final quarter.

Some players carrying injuries were given time to recover before the cup final with Weston. Alfie Richardson sat out the game with Louis Ogilvie moving to fullback. With James Donohue and Dan Hussey rested after the match at Launceston colts Ben Rodriguez and Jonny Sanderson came in on the wings with Dai Matthews chosen at centre for his last league game before retirement. In the front row Kieran Wilson was excused duties to play for Gloucestershire in the semi-final of the U20 County Championships, with Luke Panting starting at loosehead. Other changes were in the back row where Louis Osborne moved to No.8 after Jim Massey dropped out with Charlie Squier coming in on the flank. Henry Low, home from university, covered the front row on the bench with Tom Williams brought in from his anticipated rest day to cover the remainder of the forwards and Harry Woolf was the backs replacement.

Bridgwater were determined to win to ensure they finished higher in the table than near-neighbours North Petherton who were likely to secure maximum points at Coney Hill. Bridgwater were looking for ‘the double’ over Thorns having won through a late penalty at Rockhampton last September.

Thorns were asked to bring their away strip to avoid a potential colour clash only to discover that Bridgwater had opted not to wear their predominantly black shirts and wore shirts with a substantial amount of red, the same colour as Thorns’ shirts.

Thornbury kicked off on a chilly but bright afternoon and after a few even moments were close to scoring when Jake Wood made a break and good pace from the Thornbury backs took play to the Bridgwater line. Thorns tried to barge over but good defence kept them out and Bridgwater cleared.

Bridgwater’s ball-retention was good and they went ahead on twelve minutes when after good continuity in the Thornbury ‘22’ space was created out wide for Jay Owens to score an unconverted try. As the first quarter came to an end they went further ahead when George Sluman was driven over from a driving lineout. Skipper Stuart Heal converted for a 12-0 lead.

Thorns had thus far played within themselves but from the restart engaged overdrive and played with a pace and tenacity which saw them tie the scores. Jake Wood was the first to score, showing deceptive strength and fierce determination to slip out of the grasp of the Bridgwater pack and head for the line. He was brought down just short but reached out to place the ball firmly on the line for the try. He converted his try to reduce arrears to 12-7.

Sam Evans and Louis Osborne made good ground down the right before the ball was moved quickly to the left where Dai Matthews took play on before Sam Poustie cross-kicked for Ben Rodriquez but the home defence just got to the ball first to call for the mark and clear. Jack Summerfield enjoyed a charge through midfield but was replaced by Henry Low shortly afterwards following a knock on his shoulder for precautionary reasons.

Thorns then scored a glorious try out of the top drawer. The pack took a scrum against the head on half way and Dai Matthews made the most of the surprised home backs by stepping through them and racing clear. He passed to Jake Wood in support who in turn fed Harry Glew running flat out. He was tackled ten metres out but offloaded to Louis Ogilvie to score. The conversion missed but the scores were tied at 12-12.

Sam Poustie and Jake Wood combined to open up the Bridgwater defence late in the half but the scoring pass went to ground. Instead Bridgwater took play into the Thornbury half and Heal kicked a penalty to see the home side 15-12 ahead at half time.

Thornbury should have gone ahead in the first minute of the second half when Glew and Wood ripped through the Bridgwater side but as the ball was moved to the right a scoring pass was intercepted close to the home line and Bridgwater were able to clear. Shortly afterwards Thorns launched a driving lineout which rumbled diagonally towards the line. The referee seemed to think the maul had stopped but it was still moving when he blew up. One of the Thornbury forwards advised him of the error of his ways and was penalised allowing Bridgwater to clear.

Shortly before the end of the third quarter Bridgwater replaced their hooker and this seemed to take the edge off Thorns play. The scrum had been in control until that point but from here on the home unit had the edge. Sam Evans went off with an injury to be replaced by Tom Williams and as the third quarter drew to a close Sluman scored again from another rolling maul. Heal’s conversion opened up a ten point margin at 22-12.

Thorns hit back almost immediately when Jake Wood kicked the ball behind the defence and chased hard. A clearing kick was charged down and gathered by Luke Panting before Sam Poustie gave Dai Matthews the chance to charge through the home defence and score his 100th try for the First XV. Jake Wood converted to reduce the lead to 22-19.

Harry Woolf came on for Jake Wood whilst Bridgwater, fearing that their plans were going awry, made a further change in the pack and the forwards kept the ball tight. Replacement Craig Coleman crashed over after constant pressure in the Thornbury ‘22’, Heal converting, then with time running out a second replacement George Musgrave scored an almost identical try. Heal missed that conversion but the referee blew for the end of the match shortly afterwards with Bridgwater enjoying a 34-19 win.

Bridgwater’s victory was less comfortable than the scoreline would suggest and Thornbury deserved to get something out of the game. They finish the league in eleventh place, a significant points margin ahead of the relegated sides below. The backs looked sharp and up front the set piece went well. Defensively there were some missed tackles but thankfully, there were no serious injuries sustained to add to the current list and Thorns can now prepare for the Combination Cup Final with Weston on April 25th.