MORE THAN JUST A GAME 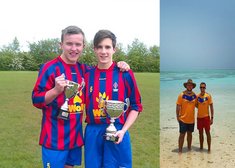 MORE THAN JUST A GAME

Club Captain Jack Whitlam wrote the following, which just goes to show that Junior and Grassroots football is much more than just exercise and fun.
You’re not the only one who would love to be running around Queens Drive right now; scoring that last-minute winner, assisting your teammate, making a last-ditch tackle or making a top draw save. I too, would love to be out there.

See, I’m just like you, for 13 years I put on that blue and red strip every Sunday. I would run out the door and throw my boots, shin pads and water bottle into the car (although sometimes I forgot my shin pads)! My parents would drive me the short distance to Queens Drive and I would run out of the car to meet my teammates already kicking a ball around on the pitch. I’d join in taking shots at our keeper - not that I would ever score! I was a defender. I would love to head the ball and make last ditch tackles. For me, there is nothing better than sliding in last minute to nick the ball away from a striker rushing through on goal.

My team was pretty successful. We played under Billy Holt and Chris Dorgan. There was no messing when Billy was in charge, he taught us how to play as a team and how to win. We won the league cup a few times but always seemed to miss out on winning the league. We moved to the Selby league and won the cup but again missed out on the league. After that, Billy and Chris decided to hang up their coaching boots and it seemed as though we would have to move to a new team.

There was around five of us who played together since we were 5, we were 16 now. Thornes was our club and we didn’t want to give up that easily. We built a strong side. I brought in some players from the schools district team and my other teammates brought back some familiar faces who played for us when we were younger. We were more determined than ever. John Hinchliffe and David Sutcliffe stepped up to manage us. Yes, your chairman and treasurer used to coach! We went on to win a league cup AND win the Huddersfield league. Maybe it was the new tactics of our very own Pep Guardiola (John Hinchliffe) or maybe its because we were such a close knit team (I think the latter)!
The truth is though, I’ve not kicked a ball on Queens Drive for 5 years now. That doesn’t mean of course that I haven’t seen my teammates. See, your teammates become your family. You spend every Sunday morning and every Tuesday evening with them, sometimes more. They create chances for you and celebrate with you when you score. They pick you up after you let one in, they don’t moan, they just say ‘let’s get one back’. They laugh with you when you nutmeg the opposition and applaud you when you make a 40yard cross-field pass. You experience highs and lows with your teammates and that creates a bond that nothing outside of sport can create.

5 years since I stopped playing for Thornes but it’s not that long since I last saw my teammates. In fact, just before Christmas, I flew to Australia to see my teammate. My teammate is called Kieran. He was a unit! We played together at centre back for many years - we were like Vidic and Ferdinand, Varane and Ramos, Terry and Cahill (or at least we liked to think we were). He moved to Australia not long after we stopped playing to go play rugby and has stayed out there ever since!

We spent a week together on Heron Island, an island on the Great Barrier Reef. It took us SEVEN HOURS to drive there. But the whole way there we didn’t stop talking! We spent the whole journey ranking the best players we’d played with and against, talking about our favourite matches and arguing over who scored the best goals. We laughed about when he got cramp and screamed so loud that most of Wakefield could hear and about when someone kicked the ball into my face and it rebounded back into our own goal.
See those memories that you make on a Sunday morning will stay with you for the rest of your life. Those teammates who you stand alongside at kick off become your family, who will continue to be your family long after you stop playing. While we’re away from the football pitch right now, it is easy to see that we take those Sunday mornings for granted. Use this time to reminisce with your teammates, send them a message or set up a video call with your team and rank your favourite Thornes memories and dream about those to be made in the future.

Thornes JFC will be back!