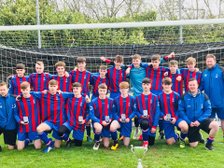 In perfect conditions for football, both teams started brightly in this U16 Challenge Cup Final, hosted at Garforth Town AFC's Wheatley Park ground. It was Thornes however who had the first chance. A perfectly weighted through ball from Alex Nolan found Pawel Topa in the inside right channel who raced onto it to finish past the keeper to open the scoring after 3 minutes. After conceding an early goal, Robin Hood eventually settled in to the game and started to create a few opportunities of their own. Despite some pressure though, Thornes also created further chances and looked particularly dangerous on the break. After 30 minutes, a Spencer Turner corner caused havoc in the Robin Hood six yard box and Thornes midfielder Josh Topp was first to react, lifting the ball into the net to double their advantage. Robin Hood again pressed but found the Thornes defence and goalkeeper Ellis Pickard on top form, allowing Thornes to go into the half time interval 2-0 up.

Into the second half and Robin Hood knew they had to come out and score the next goal to get back into the game. After 50 minutes they got their goal with a header from a corner to put some pressure on Thornes. There was no panic from Thornes however who shortly afterwards restored their two goal advantage. Pawel Topa raced onto a ball over the Robin Hood defence to slot past the keeper bringing the score to 3-1 to Thornes. Once again, Robin Hood dug deep to try and claw their way back into the game. On 60 minutes, good work on the Robin Hood right saw a ball fizzed into the six yard box which Ellis Pickard could only parry, allowing their striker to finish to bring them back into the game at 3-2. Once again with only one goal in it the tension increased. Robin Hood pressed for the equaliser and on 62 minutes they had the ball in the back of the Thornes net again. Once again following good work on their right the ball was crossed and was tapped home at the far post. Much to Thornes relief however, the flag was raised for offside and the goal was ruled out! Thornes realised the game wasn't won and they would probably need a fourth goal to ease the pressure. On 65 minutes, up stepped the impressive Pawel Topa, who latched on to a ball just inside the Robin Hood half and accelerated through their defence, beating two defenders and the keeper to slot home Thornes fourth and his third goal of the game. With 15 minutes plus injury time to go, Thornes knew they would have to defend well to see out the game and hold off the inevitable Robin Hood pressure. The Thornes defence and midfield did exactly that. With 2 minutes left to play, Thornes keeper Ellis Pickard produced a world class save from point blank range to ensure his side saw out the game as 4-2 winners. The highly competitive game was played in great spirits and both sets of players were commended after the game with no yellow cards issued. There were man of the match performances all through the Thornes team today including Pawel Topas hat trick, but man of the match went to Josh Cameron-Edwards for his tireless, gritty performance in the heart of Thornes midfield.