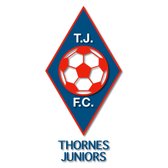 The under 7 Colts hosted Alverthorpe in an entertaining cup fixture at Queen’s Drive. Thornes fell 5-3 behind at half time with George Adams scoring all three goals for the hosts. Despite a great second half performance effort from all of the lads and further goals from Thomas Waldie and George Adams, Alverthorpe held on under Thornes pressure and won the game 6-5.

The development side ran out 5-1 winners in an impressive win. Jacob Hutchinson got 4 goals and Arran Lyon scored one.