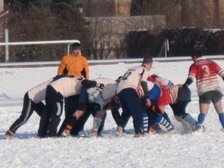 Thornton arrived at the Ozolnieki stadium in Latvia in their immaculate pink kits, however the nerves were apparent as the 2nd XV captain clung to a tree and melted the snow in spectacular fashion.

The tournament kicked off, and Thornton lost in the first match to Latvian side Stats by 5-15, despite scoring the first try courtesy of Mark Burrows. Stats were runners up in the Latvian national league.

Thornton's second game was a one sided affair as they lost to &#256;da&#65533;u &#268;ipsi (can Campski pronounce it?) by 37-0. This match was a low point in Thornton's Snow Rugby experience, against the tough eventual finalists, who featured Latvian international players (with mullets!)

Some suspect handling was the main reason for this outcome, and Thornton was still climatising to the snow covered surface.

The final game was against Estonian outfit the Baltic Tigers, and it was Thornton's chance to redeem themselves and rescue the weekend.

Chad Feldwick was unavailable through injury, but an inspirational Mark Kelsall raised Thornton's spirits and motivated the team. A try in the first half from Dom Lewis put the pressure on the Tigers, plus a conversion from stag Mike Butler. More pressure from Thornton with Liam Regan getting tackled high near the posts earnt a penalty-try, converted again by Butler.

A tense final&#65533; saw the Baltic Tigers score from a quick-tap under the Thornton posts. Stern defense from Pete Smythe, Boot, Mark Kelsall, Liam Regan, Dale Beardsall, Dom Lewis, Mark Burrows, Chis Carney and Paul Mcveigh kept the Tigers from scoring further tries. Thornton won a scrum in the last phase of play, and the ball was released to Butler who kicked the ball dead for full-time. This was a true team performance.

Quote from Baltic Tigers "Its been a long time coming but the best coached Estonian/Latvian young players have formed the Baltic Tigers. They entered a team in the Latvian snow Xs and did very well indeed considering the outstanding other sides, being knocked out by Thorton rfc from Blackpool England. This is the start ...

Full tournament results and pictures are featured on the Latvian Rugby website: http://www.rugby.lv

The Estonian rugby federation website also has photos from the tournament, with information on the Baltic Tigers, the team that Thornton beat... http://www.rugby.ee/?op=body&id=10&b=10