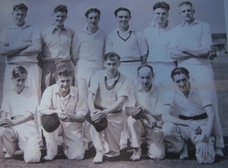 This picture is believed to have been taken of Thrumpton cc sometime during the 2nd World War. On the back row (2nd from the left) is Ron Ellis an evacuee from Birmingham. In the first four days of September 1939, nearly 3,000,000 people were transported from towns and cities in danger from enemy bombers to places of safety in the countryside.

Also in the picture is Dick Chettle (back row 4th from the left) always renown for having a "crafty fag" in the slips during games. When coming on to bowl he would always place his cigarettes and matches on the ground and use them as his marker for his bowling run up.

It is believed that Geof Shaw was missing from the picture due to being on active service for his country.