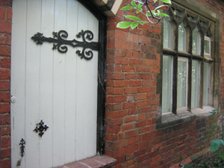 The general meeting was held in the school room on Thursday 21st April 1957.

In the absence of the President, Mr R Horobin was elected Chairman of the meeting which opened with the reading of the last general meeting by the secretary, these together with the accounts showed a balance in hand of £44-19s-10p, a loss of nearly £15 due to the loss in the sale of football tickets and no Whist Drive in the winter.

The averages were then read. Mr A Butler topped the batting and bowling and Mr W Pepper and Mr C Powdrill tied in the catches. The club had a very successful season winning 18 matches out of 27 with 5 being drawn.

The officials for 1958 were then read, the only change from the previous season being Mr A Butler was made vice-captain in place of Colin Powdrill.

It was suggested by the meeting that the secretary should try and get back some of the Vice-Presidents subscriptions which had been lost the previous season. It was also put to the meeting that during the coming winter Whist Drives must be arranged to raise money for the club owing to the seasons expenditure.

The meeting ended with a vote of thanks being passed to the Chairman Mr R Horobin who took the chair in place of the clubs President who was unable to attend.