The Opening of the Ground at Thrumpton 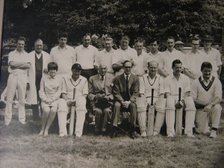 The Opening of the Ground at Thrumpton

When the club lost its former ground on Church Lane at the end of the 1967 season. Mr Seymour immediately offered the use of his park and since 1967 the ground has matured into one of the most picturesque in the County.

Below is the letter regarding the general meeting to discuss the transfer from Twentylands on Church Lane to its present home.

Dear Sir,
I am writing to local residents and others whom I think may be interested to know that the cricket pitch at present used by Thrumpton Cricket Club has ceased to be available or does so in the near future.

Our President, GF Seymour has kindly offered playing facilities in the Park and the Playing Fields Association has been approached with a view to a grant in respect of levelling of the ground, preparing the turf etc.

It would appear that an allowance of as much as 50% of the total outlay would be considered by the Association and it has been arranged for an expert to examine the site and assess the requirements.

The club has been in existence for upwards of 100 year sand has given pride and pleasure to many. It is hoped that it will continue to do so for many years to come but obviously a concerted effort will have to be made to re-establish the Club in its new surroundings.

You are cordially invited to attend a general meeting of Thrumpton Cricket Club which is to be held at the Village Hall at 7.30pm on Friday, 14th October 1966, to discuss the details of the transfer. Mr GF Seymour will preside

When the club lost its former ground on Church Lane at the end of the 1967 season, Mr Seymour immediately offered the use of his park and since 1968 the ground has matured into one of the most picturesque in the County.The ground has featured several times on national television and was a great source of pride to him.

The opening game was played between the Presidents XI and Thrumpton Cricket Club on the 16th June 1968 and the ground was opened by Rear Admiral Sherbrooke V.C. Lord Lieutenant of Nottinghamshire

Thrumpton will have their new ground officially opened tommorrow. Performing the official opening ceremony will be the Lord Lieutenant of Nottingham. This will be at 2.00pm. The ground which is opposite the Thrumpton Village church will be used during the afternoon for a game between Thrumpton Cricket team and the Presidents XI.
The opposing side has been formed by the Thrumpton President Mr GF Seymour and afterwards will be entertaining the players and wives to tea in Thrumpton Hall.

After Thrumpton Cricket Clubs ground had been officially opened by Rear Admiral Sherbrooke, Lord Lieutenant of Nottingham the home side played a friendly match against the Presidents XI.

Thrumpton batted first making a total of 102. This was followed by tea at Thrumpton Hall. When the Presidents XI batted they had no answer to the bowling of A Butler who finished with figures of 5 for 9 as the side collapsed to 58 all out. The afternoon was perfect for this first match on the new ground and Thrumpton supporters can look forward to many fine seasons to come in these new surroundings.