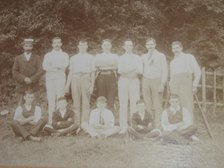 The picture shows the 1912 team of Thrumpton Cricket Club. Please click on it to enlarge. Thanks goes to Chief Archivist James Roe for his persistence in scrolling the records to find the full team. With it being 2 years before World War 1 commenced two of the team died fighting for the country.

Geoffry Cursham, son of William and Mary Cursham of the Manor House Thrumpton was educated at Hillside, Godalming and Repton. He then trained at Sandhurst before serving the 1st Battalion of the Kings Own (Royal Lancaster Regiment) as a Lieutenant. He was killed in action on the 12th October 1917 at the young age of 20

William Garratt, son of Thomas and Elizabeth Garratt was born at Kings Newton. Before enlisting he was a domestic groom at Thrumpton Hall. He served in the Royal Garrison Artillery as a Sergeant and died on the 29th August 1918. His grave is now in Melbourne Cemetry.