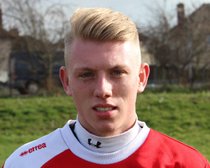 A Chat with Ryan Blackman

Who is your footballing idol?

What team do you support?

Who is the best player of all time?

Got to be Pelé. No question about it.

What is your most memorable match?

In Sweden, when I played in the Youth World Cup Semi-Final.

Who is the best player you have played with or against?

With, is probably Mark Meduca in UEFA B and against is (Luís) Boa Morte again in UEFA B.

Who is the hardest worker at the club?

Who is the biggest moaner at the club?

Got to be Sam Cutler, all day long.

Who is the most intelligent?

Who is the least intelligent?

Well there you go. Crooksy.

Who is the biggest joker?

Joker? (Joe) Nighty is up there and Crooksy because he says stupid things.

Who has got the worst dress sense?

Rimmel (Daniel). No doubt about it.

Who is the vainest?

Well, when he was here, it was (Rob) Gillman. At the moment, I'll say Sam Cutler.

And finally, who is the longest in the shower?