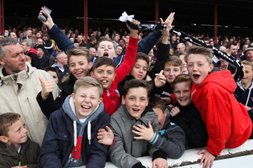 It’s still early days of course, but there’s a big Saturday of action on its way

We may only be three games into the new BetVictor Isthmian North season but already the appetite has well and truly been whetted.

Two teams are flawless, while another four have yet to suffer defeat - so what has this weekend got in store for us?

We may still be in August but the game of the season so far is coming our way.

Aveley have been well warned, but the Millers don’t suffer fools gladly and have five points to their name so far and haven’t been defeated.

Coggeshall are, for some, the surprise package so far. Two league wins and FA Cup success means it’s been a great start for the Essex side and their fans want more of the same this weekend at Brentwood.

Both Heybridge Swifts and Grays Athletic want promotion and have both started well - there’s an intriguing match in prospect at Scraley Road.

Cambridge City have high hopes but they will need to add to Hullbridge Sports early season issues - they have only scored once so far.

Romford are yet to register their first point. They take on AFC Sudbury , who themselves have lost twice.

Great Wakering Rovers have six points so far and will be confident of more but Dereham Town will have something to say about that on Saturday.

Meanwhile Witham take on Tilbury, while Histon are at Basildon Town.

The BetVictor Isthmian League’s new vehicle leasing partner Vanarama have recently launched the Club Reward scheme to help fans back their club’s budget. Every time a fan takes out a brand new van lease with Vanarama or a brand new car lease with Mototama their club will earn £100 and you will receive £30 cashback!