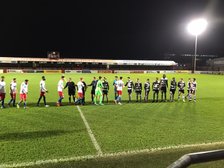 Dagenham flexed their Vanarama National League muscles early on and should have taken the lead 90 seconds after kick-off, missing a pair of excellent chances. First Reece Grant couldn’t make signifiant contact with a free header 12 yards out before Joe Quigley looped a similar opportunity over the bar.

The visitors began in a defensive shape, content to smash the ball long each time it fell to them, while Dagenham were finding early joy down the wings. Following a pair of dangerous crosses, Manny Onariase rose highest to head over the bar from the home side’s first corner.

Despite Dagenham starting on the front foot, Tilbury were a matter of centimetres from taking the lead in the 15th minute, but a last-ditch clearance off the line from Will Wood ensuring the game remained level.

Clearly alerted by the warning from the lower league side, Dagenham added a bit of ruthlessness to their early domination to take the lead. The ball fell to Joe Quigley on the edge of the box and the striker had time to turn and fire an arrowing effort into the bottom corner.

Alex McQueen nearly made it two soon after, arriving a fraction late to Bagasan Graham’s low driven cross. Any touch at all would have taken it into the open net.

Tilbury nearly took advantage of a rare foray forward, but Josh Strizovic saved smarty with his feet after Ola Ogunwamide found a yard of space at the back post to work a shot.

Strizovic’s save proved to be only a momentary reprieve, as Tilbury did get themselves back on level terms in the 25th minute. Ogunwamide broke past Will Wood on the right-hand side and David Knight made no mistake with the attacker’s cut-back, firing high into the net.

Dagenham immediately went in search of a second goal, with Quigley beating the offside trap before spooning his effort wide as Buza Vasile in the Tilbury net charged at the striker.

With set-pieces proving to be Tilbury’s most dangerous asset throughout the half, it was no surprise to see a corner make it 1-2 ten minutes before the break. The Tilbury delivery went deep to the back-post and when Dagenham couldn’t clear a Tommy Barton header, David Knight was on hand to score his second of the half.

Tilbury’s lead didn’t last long as Dagenham replied in stunning fashion three minutes before half-time. McMahon’s side won a free-kick 25 yards from goal and when Will Wright stepped up there was only one destination for the ball; it curled beautifully past the dive of Vasile into the corner to make it 2-2.

A brilliant finger-tip save from Strizovic kept the scores level as Tilbury looked to strike again on the stroke of half-time. A free-kick was met squarely on the head by a Tilbury attacker, but Strizovic reacted quickly to tip the ball over the bar.

Ogunwamide, who had looked Tilbury’s biggest threat in the first-half, took just three minutes of the second to make his presence known. The winger ran at Liam Gordon, cut inside, and fired past Strizovic from the edge of the box to give the visitors their third goal of the night.

McQueen had Dagenham’s first chance of the second period, created by a neatly threaded pass from Harry Phipps, back from a lengthy injury absence. McQueen collected the ball in his stride, but fired high and wide from a challenging angle.

On the hour mark the Daggers missed a pair of headed chances, Quigley sending the first wide of the far post before Wood glanced past the near post moments later.

Kandi was next to go close, seeing his effort saved after he beat a couple of defenders on the edge of the box, while Grant couldn’t quite make enough contact from a low McQueen cross as the match entered the final 20 minutes.

Heading into the final quarter of an hour Strizovic made a superb save to keep Dagenham in the match. Thomas Barton cut inside to create a clear sight at goal just a few yards out, but Strizovic made himself huge and got something on the effort to send it wide.

The Strizovic save looked even more important moments later, as Grant snatched the Daggers’ third goal of the night. McQueen drove down the right-wing and when his cut-back broke for Grant 12 yards out, the striker struck it firmly into the net.

Grant had a chance to win it five minutes from time, but nodded over from a corner. When the striker had another chance in the 88th minute he made no such mistake to make it 4-3, cutting in from the byline before firing a deflected effort that was adjudged to have crossed the line.

The back and forth encounter was sealed in stoppage time as Graham made it 5-3 with a terrific effort from 25 yards that flew over the ‘keeper’s head and into the roof of the net. Tilbury will have left Victoria Road knowing they played there part in a thrilling tie.

Tilbury are back to league action on Saturday, when they make the short trip to Hullbridge Sports.