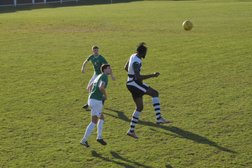 Hard Fought Win for the Dockers

A late Eljay Worrell goal, was the difference in the sides in an uninspiring game at Chadfields on Saturday.

Manager Marc Harrison went in to the fixture, making two changes. new loan keeper Joe Osaghae came in between the sticks following his move from Charlton Athletic and captain John Easterford returned to the side. Tilbury also welcomed back long term injury Lewis Smith on the bench.

In the opening 25 minutes, Tilbury were the side who had any goalmouth action with David Knight seeing Elliot Pride tipping over before volleying over minutes later. Dereham saw a dangerous free kick on 29 by Rhys Logan, that caused concern in the home defence. Before the break Hipperson saw his long range effort go over. Just before the break Oli Spooner struck over when the ball was not cleared in the Dereham defence.

Again in the second half, goalmouth action was at a premium. On 55 Ola Ogunwamide hit wide and the Tilbury back line were defending well. The introduction of substitute Eljay Worrell, saw a change in fortune. With just 5 minutes remaining, a free kick just in front of the half way line by David Knight, was met at the back post by Eljay Worrell who got his head to the ball and in to the net. The last action of a disappointing game, saw David Knight find himself clear and from the edge of the area, tried to lob Pride who collected safely.

The Dockers are in action on Tuesday when they welcome local rivals Grays Athletic to Chadfields. 7.45pm kick off.