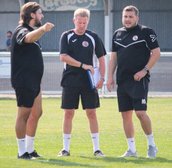 Manager of the Month for January Goes to Tilbury

The winners of the January Manager of the Month Award sponsored by Anderson Travel for the North Division goes to the Dockers Manager Marc Harrison.

Tilbury had a magnificent January, and have forced themselves into the promotion chase.

What makes their month so impressive is not only the fact that they won four of their five matches and drew the other one, but that on the way they defeated three of their chief rivals- Heybridge Swifts, Bury Town and- removing their unbeaten record- Maldon & Tiptree. Only Witham Town faced the Dockers last month and left with anything.

Congratulations to Marc Harrison, his Assistant Liam Wallace and the Management Team.