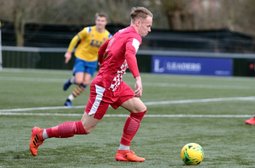 A single Daniel Waldren goal, saw Romford move off the bottom of the league and dent Tilbury’s play-off chances.
On a windy night at the temporary ground of Aveley FC, Tilbury saw the return of Harry Aldridge, Charlie Kendall and David Knight to the side.

As a match, it was not helped by a swirling wind and driving second half rain that saw all too many passes from both sides go miss placed. Louie Theophanous had the game’s first attempt at goal, taking advantage of a poor Tilbury clearance in the 4th minute, only to be closed down and have his shot blocked. In the 10th minute Charlie Kendall saw a low shot go wide of the post, before Barton heading wide and David Knight seeing his deflected effort go wide of the post. Romford’s Morgan was denied by Harry Aldridge on 40 when he saved well. From the resulting corner Okosieme headed across goal to his partner Scott Doe, but he couldn’t keep his effort down and hit over.

Early in the second half, chances were at a premium. The best chance fell to David Knight on 52 when he broke clear and his shot looked to be going into the net, before a brilliant Cafer tip over. On 54 Romford opened the scoring when Toussaint collected a misplaced clearance from Joe Turpin and crossed on to the head of Daniel Waldren who scored his first goal for Romford. Tilbury continued to push forward and Knight was again denied by Cafer on 60 when his powerful shot was well held. Romford defence were under pressure, but despite having the lion’s share of possession, they were unable to create any clear-cut opportunities.
The final 10 minutes were all Tilbury, but Romford defence held out well. On 83 Eljay Worrell saw his volley saved, after the keeper lost grasp of the ball, as it went just wide.

Tilbury’s last chance fell to Brian Moses, when Ryan Boswell crossed, but the striker hit the ball wide. The final action of the game saw Aldridge up in the Romford penalty area for a corner, but his opposite number Cafer held the cross and give Romford their 5th win in here last 6 matches.

The Dockers are not due back in action until next Saturday, when they again visit Parkside to play Aveley. Tilbury remain 3rd in the league.