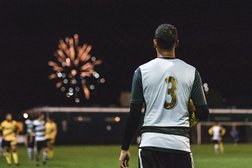 Two first half strikes, saw Tilbury beat rivals Grays Athletic in the league for the first time in 8 years.

Manager Marc Harrison went in to the fixture with an unchanged line up.

The Dockers started lively with David Knight going close in the first minute, before Oli Ogunwamide saw his shot well tipped over by Danny Sambridge. On 8 Sambridge was again in the action when he saved well from Oli Spooner. On 23 Tilbury lost the services of experienced defender Lee Burns with injury, but this did not hinder them as they took the lead on 23. Oli Ogunwamide got himself in the box with a good run, before being tripped by Joynes and David Knight scored his 18th of the season from the spot.It was a good period for Tilbury and deservedly went further in front on 31 when Ogunwamide was again in the thick of the action crossing for Tommy Barton who initially headed the ball down before striking towards goal, taking a slight deflection passed the helpless Sambridge.
Knight and Barton both had good chances to increase the lead, before Grays were reduced to 10 men when Captain Lewis Dark was dismissed. Just before the break Knight was put through by Boswell and his shot went low.

Despite being a man down Grays came out stronger after the break, with Tony Stokes hitting an effort over. On 57 Tilbury had a good chance when Boswell crossed from the right to Brian Moses who stabbed his effort wide. Nathan Fox came close to reducing the arrears on 58 when he was played in, but his shot went just wide.
Grays continued to create the possession, but did not call on Joe Osaghae in the home goal. Late in the game Grays substitute Mitchell Hahn saw his brilliant effort just go over as the visitors finished strong.

The Dockers saw the game out and another clean sheet was notched. The result see's Tilbury move up one place to 4th, level on points with the 3rd team.

The Dockers are in action on Saturday, when they are up against play off rivals Heybridge Swifts. 3.00pm kick off.