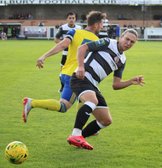 Pre Season finishes with a draw.

Hythe and Tilbury fought out a 1-1 draw on a blustery afternoon in Hythe, which completes both sides pre season.

It was Tilbury who were first to settle, after four minutes Toby Aromolaran blasted over the bar from just outside the area and then Webster had to be at this best to block Ola Ogunwamide as he broke through. The home side on 16 saw Frannie Collin send in a free kick from 25 yards that Tilbury keeper Connor Wheatley had to parry away. The Dockers had another chance on 23 minutes as George Sykes laid the ball off to Aromolaran in space but he mishit his final shot well wide of the goal.

Hythe were ahead on 25 minutes as Luke Blewden attempted a shot that fell to Chris Kinnear who hooked the ball home from close range. One more chance for Tilbury before the break saw a cross from Ryan Boswell met by Oli Spooner who looped the ball over the bar.

Hythe looked the more likely at the start of the second half as Tom Carlton played the ball through to Collin whose shot was saved to his right by Wheatley. However, as the half-progressed Tilbury looked the more dangerous as on 55 Spooner broke through on the right-hand side but his attempt was well saved by Nicholls. Within a two minutes, Nicholls saved well again as he palmed the ball around the post from a good shot by Charlie Kendall.

Kendall was in the action again on 58 minutes as the Hythe defence failed to clear a good ball from George Sykes and the ball fell to Kendall who fired home. Tilbury continued to threaten as Ogunwamide scooped the ball over the bar. At the other end Callum Taylor sent a long ball through to Collin who attempted to chip the ball over Wheatley but the ball went wide.

Before the end both sides had one more opportunity with the first falling to the Dockers as a looping ball through from Kendall found Sykes who headed wide and then with four minutes left on the clock Ryan Boswell failed to clear and the ball fell to Tom Walmsley but the Hythe youngster sent his shot wide.

Both sides had to settle for a draw as they both prepare for the season’s start next Saturday. Tilbury will entertain Cambridge City with a 3pm kick off.