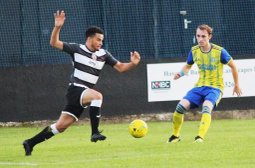 Tilbury F.C were comfortable winners in their evening fixture at the Chadfields as they beat Hashtag United F.C 4-1.

The first goal for Tilbury F.C came in the 50th minute as Marcus Bowers rose above opposition defenders to land the ball in the back of the net from a powerful header.

Just a minute later Daniel Cheema doubled Tilbury’s lead from point blank range after an excellent solo run on the right from Ola Ogunwamide, he dribbled past 2 players and cut it across goal for Cheema to slot home.

Daniel Cheema was involved yet again as he delivered an impressive lofted cross to the far past which met the head of Tommy Barton who expertly directed the ball into the side netting past Tim Pitman.

The Tags pulled one back as they took advantage of a loose ball that was played by goalkeeper Rhys Madden which was intercepted by Harry Honesty and carefully slotted into the bottom left corner.

There was a sense of hope for Hashtag F.C as they only needed 2 goals in 15 minutes to pull them level.

It was just not meant to be for the visitors as Ola Ogunwamide put the game beyond reach when he again breezed past 2 defenders on the right hand side, cut inside, and rifled home a powerful strike with his left foot to make it 4-1.

In the first half both teams were stuck in a stalemate but Tilbury looked most threatening as Toby Aromolaran made some majestic runs from the right hand side but could not quite beat goal keeper Cav Clarke, who was soon after substituted off due to injury.

This was a good opportunity for the squad to regain match fitness as the beginning of the season fast approaches Tilbury F.C, Head Coach Marc Harrison is set to have some selection dilemmas as several players have been putting in noteworthy performances.