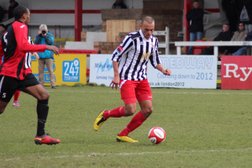 West Scores in the South

Another vital Jack West goal saw Tilbury inflict a well deserved win over Chatham Town on Tuesday night. Lopes Da Pina and Ryan Flack made there first starts for the Dockers.
Tilbury started brightly and Jack West had an early header after good work on the right by Ryan Flack. Chatham's Ade Yusuff had a shot on 18 comfortably saved by Ramos, before there best chance of the half falling to Hales who struck the base of the post from a cross.
Tilbury were dealt a blow on 27 when Babalola had to be replaced due to injury. Yusuff who was a threat, blazed over on the half hour, before Tilbury substitute Aiken had a great chance on 36 when he flicked just wide from a Flack corner. Tilbury kept pushing and Jack Carlile had a chance when he volleyed wide from another Flack corner.
On the hour Ramos made a triple save from Yusuff when he saved with his hands, body and feet.The next attack saw Carlile hit inches wide. On 64 Jack West crossed the ball into his brother Sam whose header was well saved by Kidman. The resulting corner saw Tilbury take the led when Flack found Jack West who comfortably headed home past Kidman. From the restart Chatham had two good efforts with Tilbury not concentrating. Chatham stepped up there game and substitute Jamie Taylor headed a whisker wide of Ramos right hand post.
With 3 minutes remaining Tilbury should have put the game out of sight when Jack West fired wide from an Aiken cross after a mistake in defence.
Deep into injury time Aiken weaved in and out and hit wide.
This was the last action of an entertaining game.

After the game manager Paul Vaughan commented. "I was delighted with a solid performance from the boys. An excellent evening for the team". "We must now focus on Saturday's FA tie at home to Aveley".

Subs not used: Hunt and Vaughan