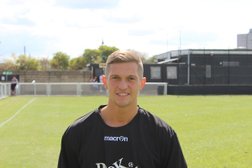 Tilbury edged out a battling Maldon and Tiptree side with a late winner in a edgy encounter, pulling Tilbury away from the relegation zone. On a bright sunny afternoon and with both sides desperate for points, Tilbury made four changes from last week' FA Trophy game at Thurrock. Lemar Johnson took over in the sticks and Jake Pooley and Alan Vezza returned to the side with Danny Smith returning to the line up after 2 years away.
The Dockers started energetically with Babalola going close after a slip in the visitors defence. On 11 Remy put a difficult bouncing cross from the right into the goal area but no home boot could get a touch. The game then developed into a scrappy encounter as both defences cancelled each other out. The first goal of the game came on 31 minute when Remy's effort was initially saved by Giddens, the ball rebounded kindly for Babalola to head home from close range.

Maldon struck back within minutes when Hunter's free kick from the right found ex Docker Joel Barnett who slotted home from the six yard box. Before the break Barnett again went close, before Emiel Aiken struck the bar from close range. Maldon started the second period strongly and Barnett volleyed over from distance. Tilbury's best efforts came from distance with Remy and Flack hitting from 25 yards but comfortably saved by Giddens.

With 10 minutes remaining, both sides had clear edged chances, with Joel Barnett seeing his close ranged shot brilliantly saved by Johnson after a mistake in the defence before substitute Jack West being sent through, but his left footed volley just went over the top. Just when people thought that a share of the points was just about fair result, Tilbury scored the all important winner. With just 2 minutes remaining a Flack effort was blocked and with the ball floating around the box, it fell to Harry Cook who sent his looping header over Giddens and in to the net to the relief of the home supporters and breaking the seven game losing run.
The home side then managed to hold out with only another Hunter ball across goal that was missed by everyone giving them any difficulty.

Tilbury are due to be back at Chadfields on Tuesday night against Conference side Braintree, with the game to be confirmed after Braintree's FA Cup replay.
Manager Gary Henty commented after the game "Delighted with the win. It is a result that has been coming and now that most of the squad are fit, we look more the side I expect to see on the pitch"

Subs not used: Webb and Obersteller