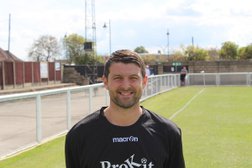 Tilbury got back to winning ways with a thumping of mid table Waltham Abbey on Saturday. The result see's the Dockers score there 10th goal in the last 3 games and importantly a clean sheet. Manager Gary Henty made just 2 changes from Tuesday defeat with Elliott Johnson and Matt Game returning to the side in place of Jake Pooley and Tom Wood. The first half was an even encounter with lack of goalmouth action. Both sides had half chances with Elliott Johnson having his effort well blocked on 18 and Giddens having to tip over a wind assisted free kick on 29. As some spectators went for their half time cuppa, Francis Babalola cut in side inside on his left and unleashed his effort into the bottom corner. Waltham Abbey seem to lose their opportunity as they had the wind behind them during the opening half. The second half was a different story, as Tilbury coped better with the conditions and kept Abbey down to just one effort after the break with Russell seeing his shot well blocked by Assistant Manager Danny Smith.

Tony Martin who was busy all afternoon headed just over before Tilbury were awarded a penalty on 67 when Babalola was needlessly brought down in the box and Martin crashed his spot kick down the middle. In the final 10 minutes Tilbury dominated and were rewarded with 2 goals in as many minutes. Substitute Ruben Duarte who had only just come on lobbed the keeper from the edge of the box after a ball from Martin on 83. Tilbury made an immediate substitution with Tom Wood coming on and within 20 seconds he was also on the score sheet when Rimmel Daniel found him at the back post to head home

The result keeps Tilbury in 11th but closer to Aveley and Ware in 9th and 10th. Ware are next up at Chadfields on Saturday.

After the game manager Gary Henty commented “An excellent second half performance from the boys. I thought our defence was solid and to score 4 has delighted me. A sign of a good team is to bounce back after defeat and we did that this afternoon”

Subs not used: Aiken and Pooley