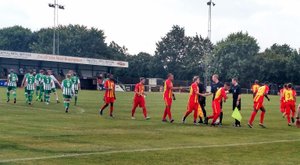 Great Wakering scored a late winner as they beat Tilbury 2-1 to earn the home side a first win of the season. Tilbury made one change from Saturday's win, with Toch Singh coming in for Tom Anderson.

The first half saw both sides have a number of efforts at goal, in an end to end half.

It was a difficult first-half for the home side as they lost two players due to injury, which included Nick Hilder who was treated for a number of minutes, but one of the replacements came up trumps.

After Wakering had a succession of corners, they struck on 36 when a corner was met by substitute Jay Nash headed home. The same player could have made it 2 seconds later.

But that lead wasn’t to last, as Tilbury came out strongly in the second-half and Eli Benoit equalised with a header from a Kurt Smith corner.

With just 2 minutes remaining, Wakering scored after a good move on the right was finished off by Billy Johnson. Deep into injury time after lengthy pressure, Toch Singh hit over with the final kick.

The result sees Tilbury drop to 16th and travel to Felixstowe and Walton United on Saturday in the FA Cup.