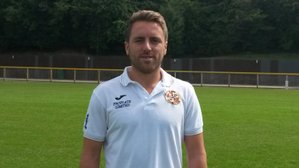 Dockers Come From Behind

Kurt Smith in his 100th appearance for the club, was instrumental in helping Tilbury to a hard fought 3 points to see the Dockers move up to 6th, just outside of the play offs.

Tilbury went into the game with an unchanged line up that included new signings Reece Hewitt and on the bench Lewis Francis.

Tilbury had the first chance of the evening on 5 minutes, when a free kick was headed by Reece Conway on to the post. Witham looked a threat and took the lead on 9 minutes when a long range free kick was well saved by Lee Butcher, but Nathan Koranteng was on hand to score. Tilbury were then dealt a blow when Reece Hewitt was replaced due to an ankle injury, but within a minute were back on level terms. A ball was played into Kurt Smith who held the ball up well, leaving Toby Aromolaran the opportunity to fire low into the net. Lee Butcher in the Tilbury goal had to be at his best on 16 when Koranteng's effort was well saved, before Ryan Imbert saw his effort equally well saved. Witham had a good period in the game and Imbert on 24 saw his effort go close. Just before the break, Tilbury had two good efforts with Toch Singh curling wide and Lewis Jaggs from 18 yards go just over. On the hour Imbert again went close with a shot, before a long ball from Conor Mead on 65 find Neil Richmond who swung his body and fired into the net for his 3rd goal in 2 games.

On 70 midfielder Aromolaran turned defender as he cleared off the line. With 4 minutes to go, it looked certain that Witham would equalise as Butcher made a fine save and amongst the scramble, Conor Mead cleared an effort as it was going towards gal.

The result sees Tilbury move up another 2 places to 6th. Tilbury are back in action on Saturday, when they travel to Haringey Borough.